A game about a guy trying to steal classified files, so when he sees people trying to get them back, he slowly goes from floor-to-floor escaping, using the slowest method around, Elevators.

What more could you ask for?

A variety of earlier versions of used sprites, as well as an unused leaking barrel, are loaded on the game's title screen. No palettes exist for any of these graphics; the default player palette is used here as a placeholder.

This early design of the player character is more realistically proportioned, with black eyes and a larger pompadour. The final design is in an almost chibi style, has brown eyes, and tones down the hair a bit.

Oddly, the sprite of the player turning in the getaway car still uses the older design.

The player's rope descending animation includes the actual rope in the early design.

The package was originally intended to be a separate sprite that would be overlaid on the player's standard walking graphics, while the final game uses unique graphics that fully replace the lower half of the walking sprites. The early design is also lacking graphics for jumping and crouching while carrying a package.

The game uses special sprites for the player when they get on an escalator. The player's head is fully visible in the early design, while the newer graphics partially cut off the player's now larger head while ascending escalators. This isn't really noticeable... 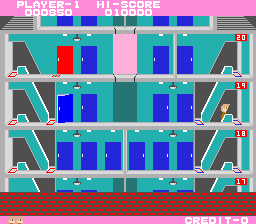 ...until the player reaches the top of an escalator.

The early spriteset has a simpler death animation. The sprite of the player collapsed on the ground is supposed to use two 16x16 tiles, but the tile for the player's head is no longer in the game.

The animation of being crushed by an elevator does not exist in the prototype spriteset.

The enemy agents went through a similar stylistic change as the player.

The awful cream-colored suit seen here is probably supposed to be some shade of gray.

The animation of the enemy agent falling down has many more unique frames than the final animation. The space gained from deleting those frames was used by new jumping and crushed-by-elevator animations.

Life and Time graphics that would appear on the otherwise blank brick tiles that are below the playfield and above the HUD. The upper-left corner of the Time graphic has been overwritten by the ")" character used to display coinage info.

An unused barrel object. If shot by the player, it would burst open and empty its liquid bounty. Obviously the red color is incorrect and the barrel wouldn't, well, bleed out like that. There's also a separate spray graphic that would be overlaid on the barrel.

Enemy agents would also hide in barrels. How devious!

Like the gun burst, the bullets and impact shots are solid red in the earlier graphics, while they're yellow & red in the final graphics.

The escalator sprite overlay has a gray outline on the bottom which matches the escalator foreground tiles. The final graphic is missing that outline, but since it's just an overlay, the outline of the foreground tiles will appear underneath anyway, so it doesn't really matter.