Evander Holyfield's "Real Deal" Boxing is a boxing video game that was developed by ACME Interactive (who subsequently changed their name to the more well-known Malibu Interactive) and published by Sega in 1992. It was released for the Sega Genesis and Sega Game Gear consoles. It was followed by a sequel that featured a number of improvements, Greatest Heavyweights. 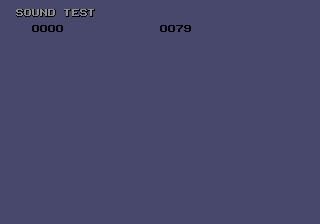 Enter the options submenu and select the fourth option (which doesn't have any corresponding text) to access the Sound Test.

There is a track number on the left and counter on the right. Press Up and Down to choose a track, then B or C to listen it. Note that every time you play a track it's superimposed on others and the counter is reset. To stop music press A. To exit the screen press the Start button.