Exzisus is a side-scrolling shooter with a name that makes it impossible to talk about out in real life. Of course, this assumes that you're talking to people who would bother knowing about obscure arcade games from the late 80s.

At address 0x00050 in CPU-A is this programmer credit:

And, at address 0x07FC4 (also in CPU-A) is a more comprehensive staff list:

There are two distinct builds of Exzisus: One with its own dedicated hardware, and one that uses the JAMMA board standard.

Anyway, the following set of credits is only on the dedicated version's CPU-B at 0x07FD7:

ROM address 0x7FFF in CPU-B controls the copyright strings on the title screen. There are four different strings, but since this game was only released in Japan, only one of them is used. There's an additional copyright ID, 00, which uses the standard copyright message but disables the export warning. The TAD-published game overwrites the licensed message with "© TAD CORP., 1987" on one line.

Place this cheat in MAME's exzisus.xml file (or exzisusa.xml for the JAMMA-converted set) to change the copyright information:

There are two copyright strings in CPU-A that are unused by any means. The first is at 0x7FAD:

The dedicated cabinet and conversion kit versions have a number of differences between each other, possibly due to the various disparities between having full dedicated hardware and a simple software conversion kit running off of older and possibly weaker hardware. 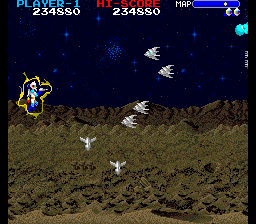 The barrier upgrade from the dedicated board. 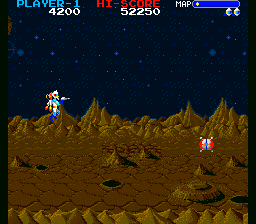 The powerup canisters that only appear in the conversion kit version. 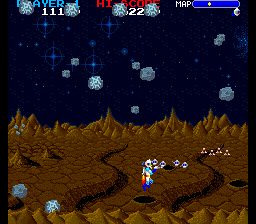