The game contains a table of information about non-player-controlled aircraft, which, to quote that page, includes:

The F-14 and F-117 models are still present in the game file PLANE1.3DX. The images below show renderings generated with as-yet-unreleased software, which also show the model numbers in that file: 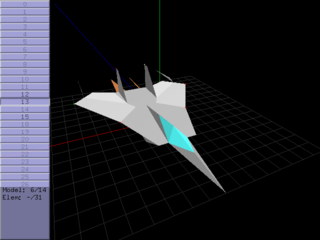 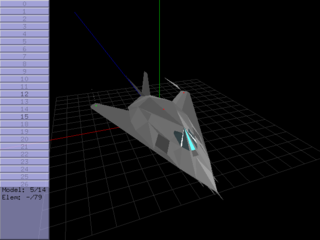 The following table shows details of the AI aircraft in version 4108.01 of the game (this is probably unchanged in version .03) that have no associated models and hence are clearly unused. Note that their names indicate that they are all helicopters:

The game contains a table of information about weapons that can be used by non-player-controlled aircraft. This table includes air-to-ground weapons, which the AI does not actually employ. This suggests that at some point there may have been a plan to include friendly AI that would attack ground targets. This feature was included in the next flight simulator from MicroProse using an evolution of this game engine, F-14 Fleet Defender.

The game includes support for enemy SA-3 SAM sites, but none are included in the released versions of the game. It is not known how SA-3 sites differ from other types of SAM site other than that the game identifies the missile using the text "SA-3"; all missiles are visually identical. It is not known if there are any models for SA-3 SAM sites.

The game's 3-D model format supports conditional rendering of selected parts of the model. A number of models including guns, such as artillery, include what appears to be a muzzle flash that is only to be rendered conditionally by the game. However, the game appears to never actually render these muzzle flashes, even for example when an AAA gun fires at the player.

Of course, if you can see the muzzle flash from your enemy's guns, you're doing something wrong.

The following images show the "Battleship" model from DSMOB.3DX (Desert Storm theater) from game version 4108.03 with and without the muzzle flash (condition number 26) part of the model - simple orange lines - enabled. Note that the "BB Top" model includes the remainder of the ship's superstructure.