Fez is a platformer released by Polytron, after lingering in development hell for several years. You control Gomez in your hunt for various secrets and riddles, as well as the pieces of the Hexahedron and various "Anti-Cubes".

The Sator Square is a word square which contains a Latin palindrome, featuring words written in a square so that they may be read in any direction. According to the game's artist, Renaud Bedard, the game was supposed to use a checkpoint system throughout, and it utilized this "Sator Square". This system is only used in the Lava section of the game, and does not include this cube. 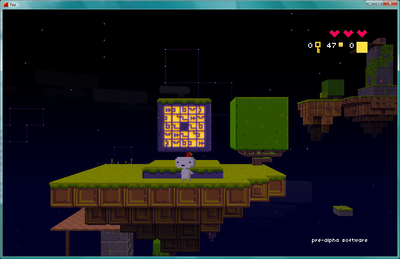 The textures for the Sator Square still exist in the game, unused.

A room with an early QR code also goes unused. 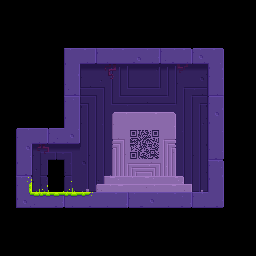 When scanned, it gives the text "LEFT LEFT RIGHT LEFT RIGHT RIGHT". The used QR codes in Fez actually use the terms "LT" and "RT" for unveiling secrets with rotation, and was confirmed by Renaud Bedard to be solely a test to see if QR codes could be read on a TV screen.