Remember the old Five Nights at Freddy's games from the past? They're finally combined into a VR game. Hurray.

This unused texture is apparently meant for Spring Bonnie. 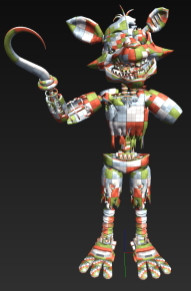 Withered Foxy's model exists, but is unfinished and lacks textures. Although it appears he's missing it, his left arm is inside his head. Presumably intended to appear in the FNAF 2 mode, Where instead he is replaced by the original Foxy. The model was eventually cleaned up and used for the FNAF 2 Blacklight levels.

Unused models for the blacklight variants for Freddy, Bonnie, Chica, and Foxy. It is assumed that four original animatronics in The Freddy Fazbear Virtual Experience will be reskinned when enabling the blacklight mode.

All of them, except for Blacklight Foxy (who doesn't seem to have any textures in the files) appear to be based on the actual merchandise products (mainly the plush toys, mystery minis, Funko POP!, and action figures).

An unused event meant for the Showtime button. Although the button itself was kept in the game, it does nothing.