G.I. Joe: The Atlantis Factor was the second G.I. Joe game on the NES, and a somewhat less linear affair than its predecessor. Capcom took over publishing duties this time around, due to the retirement of Taxan from video games.

Hope you have some graph paper handy, because this game's password system is a doozy!

Unused sprites of General Hawk with a jetpack, with versions for every weapon!

The Atlantis Factor takes character designs from the 1992 figure lineup, although the game's manual still references Hawk's Headset and Jetpack which his 1992 figure does not have.

Wet Suit has similar unused sprites, presumably able to swim in water at one point.

Unused sprites of Road Block found in Storm Shadow's and Snake Eyes' tiles. The former does not have any matching tiles in Road Block's set, while the latter is an early version of a final sprite.

Only two minibosses bounce back from hand-to-hand attacks, though none use these sprites.

Two minibosses chase the player and occasionally kneel and fire a burst of 3 energy blasts. These blasts were apparently meant to have visible windup periods.

This version of the sitting gunner does not appear in any form in-game.

Both stages where you're attacked from the air use the first missile.

Another version of the enemy that flies across over the level, though does not appear in any area.

A pair of canopy graphics found near tiles for COBRA's Sea Ray and Mamba. 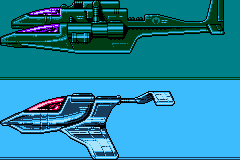 The Sea Ray and Mamba with their canopy sprites overlaid, never seen in-game.

A bomb, or explosive canister of some kind. Stored with the Mamba\Sea Ray's sprites but drop shadow suggests indoor use!

A turret facing upwards from below. Meant to be used indoors.

A drone variant, unknown if it was another item the player could use or if it was meant to attack the player as an enemy.

Three short sounds. Unknown what they were used for.

Use unknown, but a similar sound was used in this game's predecessor for planting a bomb.

A glitched version of Atlantis rising\sinking in the opening\ending of the game.

Possibly a cut sound from one of Cesspool's attacks, which involves leaping at the player and swiping at them with a sword.

A rapid series of chimes. Possibly meant to play when the player finds one of the secret statues.

Placeholder graphics found in several areas of the ROM near enemies – appropriately, in the design of a cobra!

This dialogue is never seen in-game, as the stage where you rescue Duke is inaccessible until you have Spirit.

Even then, there is no way to revisit a stage without memory hacking.

Game Genie code PEEALLAA will re-enable a level skip cheat. During the game, press Left + Select to instantly finish the current level, although this won't work in levels with more than one exit door.

A Prototype version of the game has a single major difference from the retail release, in that the entire screen' flashed white when scoring a hit on minibosses and stage bosses.