Geon Cube is the third (released) iteration of the Geon concept, after the XBLA version and the PSN sequel/update, upon which this one is fairly directly based. The games play like a less maze-y, more intense Pac-Man, challenging two players on opposing sides of a board to strategically use power-ups and eat their pellets fastest, before flipping over and striking out for the opponent's goal.

Most of the game's assets are stored in a file named DATA.BIN in the root of the disc. This file is a standard ZIP format, using deflate compression. Included within this file are a variety of XML files, SVGs and Nintendo TPL graphics. Oddly enough, even those textures specific to other platforms are in Nintendo's TPL format. This most likely implies that they were batch converted by an automated tool.

This fancy, 61-frame startup animation of the Strawdog Studios logo is found in /DATA/Titles. The Wii game simply uses a static graphic of the dog, matching the final pose here.

Uninterestingly, there's also an ESRB notice (esrb.tpl, not shown) about the game experience changing online; it's not clear whether this is simply a leftover from the Xbox or PS3 versions, or if the Wii game was actually intended to support the Nintendo Wi-Fi Connection earlier in development.

Another less-than-riveting graphic is TitlePage_EidosLogo.tpl. Eidos published the XBLA and PSN releases of Geon, but weren't involved in the Wii version. Perhaps even less exciting: the logo for UK publisher Pinnacle is included on the US Geon Cube disc: TitlePage_PinnacleLogo.tpl (not shown).

A variety of graphics remain from the Xbox 360 and PlayStation 3 versions of Geon, and there are even some from the unreleased PSP game.

Inside DATA.BIN's /DATA/360Frontend/PNG are hundreds of TPLs, including this graphic (LOAD_controller.tpl) depicting an Xbox 360 controller. 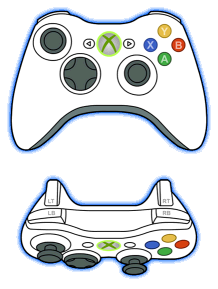 In the same directory are these images, XBoxLive.tpl and LIVE_Subliminal.tpl. The Xbox 360 version does indeed feature online play via Xbox Live.

Located in /DATA/360HUD/PNG is an instructional graphic (HUD_Tutorial_Flip_Prompt.tpl) on how to flip to the other side of the board using an Xbox 360 controller.

Back in 360Frontend/PNG are some graphics depicting the PlayStation 3 controller: PS3Controller.tpl and PS3ControllerLines.tpl, clearly intended for an instructions screen. 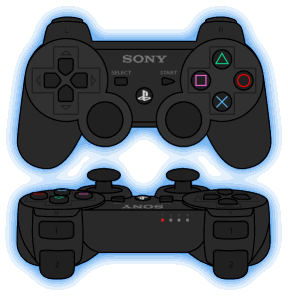 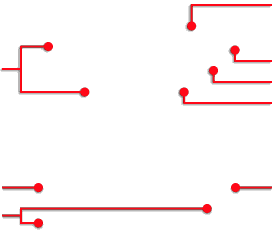 This mockup shows how the two graphics are intended to be used together. 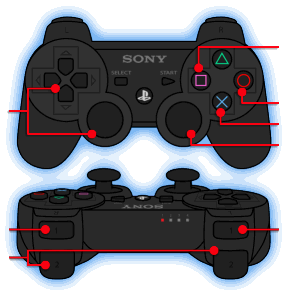 Under /MEDIA/SaveGame are some more PS3 remnants; the PS3 directory houses six images. Two of these (PIC2.tpl and SAVING.tpl) are identical. The version released on PSN was simply titled Geon in all regions, as seen in these logos.

Still in /MEDIA/SaveGame but perhaps more interesting, the PSP directory includes several images remaining from Ora, the title the game was being developed under for the PSP, before the publisher backed out and it was moved to XBLA. Apparently, these files have survived the three intervening ports to reach the Wii game. 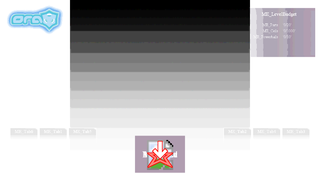 As alluded to above, DATA.BIN features a MapEditor directory, including an SVG, some textures and a few XML files for the menu, as well as files for each of the potential "parts" used in map design. The menu calls for a number of PNGs; however, since all images have been converted to TPL in the Wii game, it's possible this map editor is left over from an earlier game. The appearance of the Ora logo in the menu supports this conjecture. At right is an image of MapEditor.svg displayed using the TPL equivalents of its required PNGs and lacking the correct font, which gives the general layout of the menu despite looking quite horrible.

In addition, while it's not strictly unused, the AI file for the lowest level CPU players is AIBlonde.fragment.xml. The other difficulties have more standard names like "Amateur", "Competent", "Expert", etc.