Gley Lancer is considered one of the best shoot-em-up games on the Sega Genesis, which unfortunately remained a Japanese exclusive until it got a worldwide release on the Wii Virtual Console. 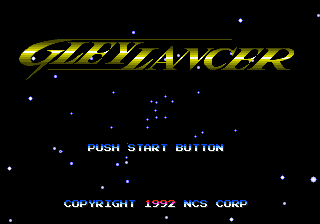 On the title screen, press Up, Down, Left, Right, B, A. The title graphic changes color as seen in the screenshot. This code, provided when the game is finished on Hard difficulty, unlocks Mania difficulty by setting #$03 in memory address $FFFE04. 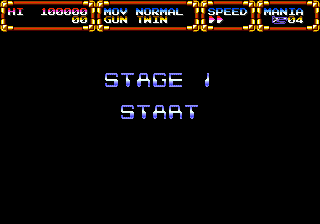 When "STAGE 1 START" appears, press B, B, C, A, Up, Down. The screen now functions as a stage select. This changes the value in memory address $FFBE98.

While the game is paused, press Up, Down, A, B, C, Left, Right, C, B, A to add one life. This code can be entered more than once for more lives. 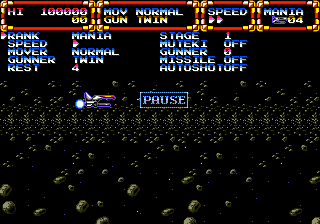 If the cheat code text is taken letter by letter (B A C A D A C A R A B U R U B U R U D A), it appears to form a sentence in Japanese, "馬鹿だからブルブルだ" (baka da kara buruburu da), which roughly translates to "I'm an idiot so I'm trembling [in fear]."

This message is found near the top of the ROM at 200:

There are unused strings located among the cheat/debug menu text block.

These likely refer to specific options in the menu:

This likely refers to the "gunner" option:

These likely refer to the "mover" option:

There also appears to be some text allowing you to turn the debug mode on and off.