A sequel named Dan-Ku-Ga was never released despite having an almost-perfect prototype version (futurely leaked) already made.

Kazuya, Lihua and Liza had their faces redrawn for outside of Japan. 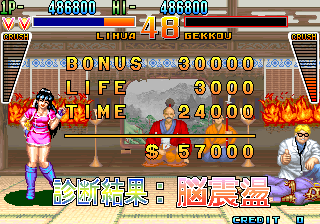 At the end of a match in the Japanese version of Kaiser Knuckle, a medic will rush on-screen to check the defeated character, offering a diagnosis as part of the end-of-fight score tally. All of this was removed from international versions.

The Test Mode in each version has different options. Both the World version of Kaiser Knuckle and Global Champion add the following options to the ones seen in the Japanese Kaiser Knuckle: