The year was 1987, and flat-bottomed rowing boats were clogging our nation's canals like bacon-smothered, butter-drenched McRibs. Gondomania was upon us.

At address 0xFDDD in the main CPU is an alternate set of credits and a declaration of love:

Here are some unused coin denominations. The currency used in game starts at 5 coins and caps at 30 coins.

And here are some unused item prices. The lowest priced item in the game is 30 coins, and the highest is 500 coins—the 450 coin price tag is simply skipped.

The international build of the game, Gondomania, seems to be more "complete" than the Japanese build, Makyou Senshi. 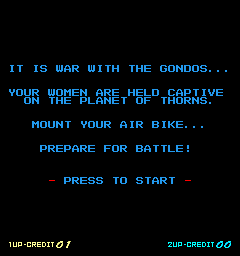 The game's main track was rearranged in Gondomania to be more rockin'.

Both players have the same ship color in Makyou Senshi, while in Gondomania, Player 1 has a nice blue ship.

The armor breaking and death animations are flashier in Gondomania.

These ship shadows can only be seen in Gondomania. Nice little addition to the game, isn't it?

To make up for Player 1's new color scheme, the ship and jet items changed from blue to yellow.

In Makyou Senshi, the basic enemies throw single bit axes, which are easily confused with the player's own axe weapon. So, in Gondomania, those generic mooks now throw maces.

An extra ship of soldiers was added to the very start of the game. While this does add a bit of challenge, it's also an extra 120 coins if the player can destroy the ship before it leaves the screen.

Towards the end of Stage 2, the large group of boomerang-throwing barbarians was replaced by a swarm of missile launcher-toting soldiers.

Starting at around Stage 5, the number of enemies in certain screens (too many to list here) was reduced. While this may seem like a difficulty change, and it is, it's worth noting that the large amount of enemies in Makyou Senshi also caused the game to slow down quite a bit, something that's not nearly as much of an issue in Gondomania.

The boss of each stage, barring stage 8, differs between versions. Note that the official names of the bosses are currently unknown.

Note that in both versions there's one boss that's used in two different stages.

The color of the first dragon is yellow in Makyou Senshi and blue in Gondomania. The palette was likely changed to match the blue Headless Dragon found in Stage 8.

The second dragon is not a mere palette swap, as it uses unique graphics and has a new fire-breathing attack.

The second Giant Mech in Gondomania, however, is just a palette swap. The only other difference between the two is that the second mech has more health. 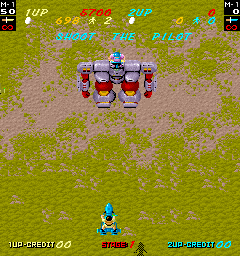 In Gondomania, there are added tips (or not) at the start of each boss fight: