This is a sub-page of Grand Theft Auto III.

Just like vehicles, there are plenty of people hidden within GTA III's digital catacombs.

Included in just about every release since the PS2 version is a file called peds.dff, which, much like vehicles.dff contains many early ped and character models. To summarize:

Unlike the final game, these are all stored as "chunks" in one .dff file (the game's model format) and would've all been loaded at the same time instead of being streamed individually from the disc.

The collection of heads that the game presumably picked from. Each pedestrian (for the most part) has two heads, each sharing the name of the body they're assigned to. Gang03 for instance has two heads named head_gang03a and head_gang03b.

For the sake of clarity, the textures these heads look for will be bundled with the body model they're assigned to.

It's the cop! His left leg components have the same names as the right ones so he doesn't work in-game without modification. Textures used: 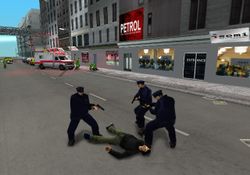 A rougher design for the generic criminal/carjacker ped. Textures used: 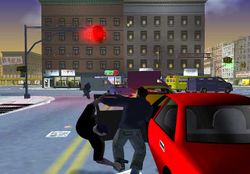 It's a duplicate model!

A very well endowed lady, never shown in any media. There are multiple heads but they're identical. Textures used:

Ditto, it's the same models.

A portly gentleman. According to his textures, he wears a brown suit and is apparently black. He has two heads but they're identical. Textures used:

A guy with a boombox! According to the materials, he was either a black man, or an old white guy sporting a brown hat. It's possible the latter was a mistake and this guy actually started off wearing a suit like the other male pedestrians. Textures used:

According to the textures, this lady is probably the same one seen in screenshots sporting a life preserver. What's looked for: 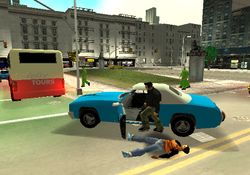 This suit-wearing woman can either spawn with a black face texture or a white one. The heads themselves are identical mesh-wise though so there's no need to compare them. 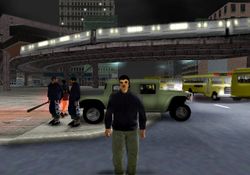 This is one thick mafioso. He was never officially shown in any media but he uses the same suit texture as male01 so we know he wore green.

The Triad. This spiky-haired head was never shown anywhere but it's duplicated for both gang03 and gang04. Textures used: 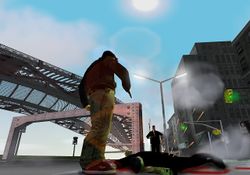 A Diablo! Just like the cop, his left leg components have the same names as the right ones so he doesn't work in-game without modification. Textures used:

This guy's mostly the same as gang05, just with one different head. Textures used:

A man carrying a briefcase. He has two unique heads, one is apparently old and wears a brown hat. Textures used: 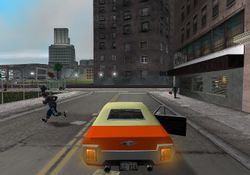 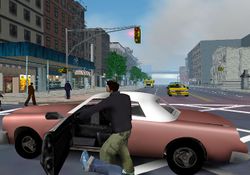 Another suited man who, since he shares textures with the briefcase guy, probably wears a green suit. Textures used: 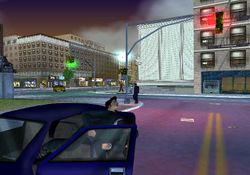 An earlier Claude! He still used Catalina's jacket texture at this point. He needs these textures: 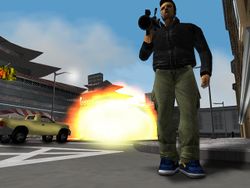 According to the materials, what seems to be a generic prostitute model is actually Misty. Textures used: 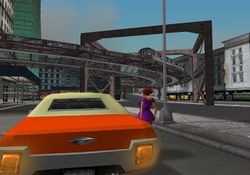 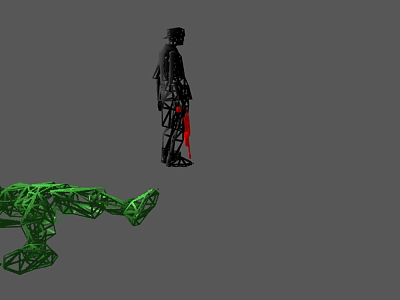 He bears a strong resemblance to this character, seen in the earliest media released for the game. 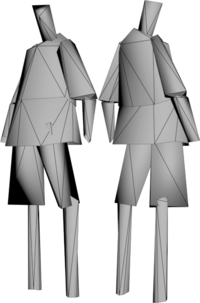 The absolute oldest model shipped with Grand Theft Auto III. He isn't set up to be a character model, and the reason for that is clear — there is a class called CDummyPed left in the mobile ports that shows the plan was to convert distant pedestrians into this cheap model. Problem is the way it was done didn't allow for animation, and it probably looked very strange anyway. List of textures needed:

An older version of 8ball from before his head was remodeled. Textures used: 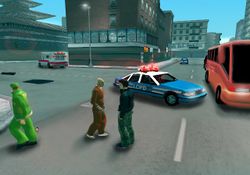 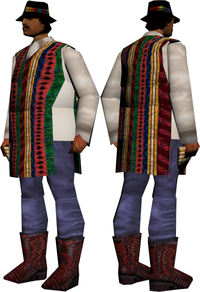 A street musician carrying a pan flute. Besides not being set to spawn, he's still fully implemented in the PS2 version: 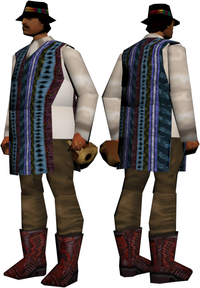 A street musician carrying a... lute? Besides not being set to spawn, he's still fully implemented in the PS2 version:

A street musician sitting down with bongos. The model's merely posed this way, there's no animations left for sitting down like this. Besides not being set to spawn, he's still fully implemented in the PS2 version: 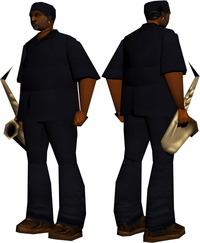 A street musician carrying a saxophone. Besides not being set to spawn, he's still fully implemented in the PS2 version: 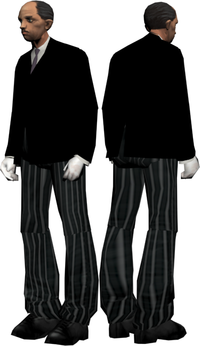 A butler which was meant to be used once in a cutscene for a mission Waka-Gashira Wipeout!. This is proven by the leaked SCM source code: 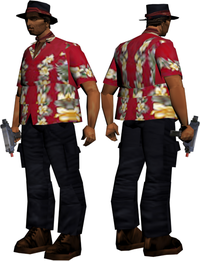 A fashionable Colombian man, equipped with an uzi and a bright red ascot. His brothers col1 and col2 are still used in cutscenes. The red tip on his uzi is from an old design and shows that he may have been cut a little earlier on than some of the other models in this section. 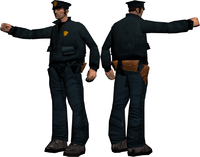 A worried-looking cop. Considering his model and texture are present in the same area of the game's archives as most unique characters, it's possible that he may have been used in a mission. His texture is also named "copcut", which implies that he was used in a cutscene at some point. He would've made a great fit for the intro, where the same generic officer model is used twice. 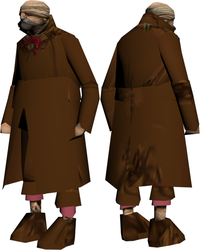 A cut story character! Darkel was supposed to be a revolutionary vagrant who led a gang of similarly-violent bums, and had an eye towards destroying the city's economy via acts of terrorism. He was removed from the game because of his tonal inconsistency with the rest of the game. One of his known missions was going to be "I Scream, You Scream", but this was moved to being given by El Burro in the final version.

Interestingly, his actor (Bill Fiore) is still listed in the credits. 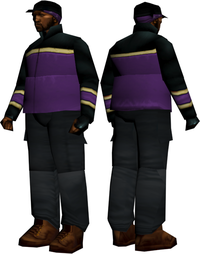 What seems to be a duplicate of gang14. 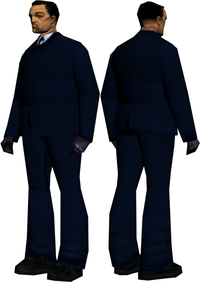 A man with a uniquely rough face and an equally unique blue suit. It's unclear what he was used for, but him being clumped up with mission-critical characters and his texture being named "mafia_goon" seems to be pretty telling. 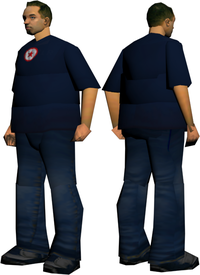 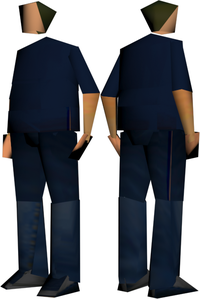 German DJ Tom Novy was originally intended to appear in the game, and his song Back To The Streets was both heard in a trailer and meant to appear on Head Radio. For some unknown reason, he was removed from the game. He has a LOD model (PC only), as depicted in the image to the right, so presumably his appearance would not have been limited to a cutscene. 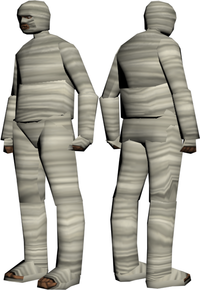 A working pedestrian version of Leon McAffrey in Plaster Blaster. Perhaps he was meant to run out of the ambulance?