Guardian of Paradise is a nice short indie freeware game from Buster (E. Hashimoto), who also developed Buster (for the Sharp X68000, then remade for PC), Akuji the Demon and Hydra Castle Adventure. While certainly a Zelda clone, it has enough innovative ideas to keep the gameplay fresh. Originally in Japanese, it later got an English fan-translation. 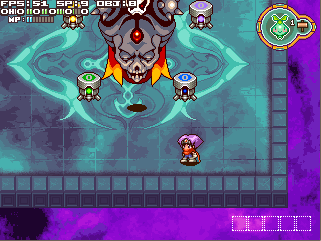 Under system.ini, you can change the value debug=off from "off" to "on". This makes debug info appear on the top-left corner of the screen, including FPS info, an object counter, and other unknown values.

"Hydra Castle Adventure" and "Buster" (which share some parts of the engine with this game) also had a similar debug value in the ini file, but it doesn't appear to have a direct influence on gameplay.

Under a script text named tk084.dat is unused text meant for the second boss battle, after which you get the freed Water Spirit. It seems that the boss was originally meant to be the water spirit possessed in some way, rather than the boss from the final game.

Even the replacement boss that appears in the final game has also unused text. The actual boss fight does not have dialogue before it starts in-game.