The game uses a combination of loose and '.rnd_ps2' files for textures, most of the unused ones are found in the game's various textures folders.

Note: The poster textures have been clumped together in one single texture for the final version. The separate textures can be found inside 'venues\basement\textures\gen' .

The red texture was originally meant to be in the Freak Pit venue, as seen here. It was later replaced with a blue version. The red banner can still be seen in the final version if you play the multiplayer mode.

Some of the textures seen here can be seen in the 'Making the venues' video at 4:18.

This texture itself is self explanatory, but where exactly it was used is currently unknown.

This texture suggests that at one point in development, you could customize your 'hero'. This idea was possibly used in Guitar Hero 2, where you can select different versions of your character. 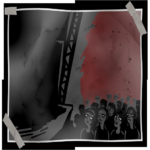 This is an unused menu texture, however it's purpose is unknown. Another texture in the game shows this with artwork of Axel Steel on it (Seen below). This could possibly be an early hero selection screen. 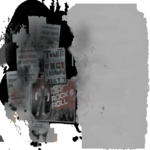 There are two extra tracks that are inaccessible without cheat devices.

This track, *Trippolette by Andi Buch (credited as Andrew Buch), was cut from the game because, to quote a designer who worked on the games, it was "snuck onto the disc by someone in QA without the dev team knowing until too late. Needless to say, he doesn't work at Harmonix anymore." Buch herself has been kind enough to set up a page with codes for every device out there to replace the song "Guitar Hero" with Trippolette. It is also possible to hack the game to add it to the setlist alongside the other songs, or to import it into the Guitar Hero 2 engine.

The in-game name for the song is "advharmony", which is taken from what it was derived from: Buch's Advanced Modal Harmony final project. In the September 8, 2005 prototype, the song is entitled “Advanced Harmony: Final Project”.