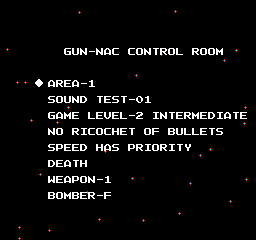 The Game Genie code PENNOYAA re-enables debugging options that were cut out of the final game:

Additionally, hold Up + Start on the "Nexoft" screen before it fades out to view the ending.

Due to having more copyright info, the mode select has to use another screen.

AREA 0 is a hidden stage, accessible by selecting track 5 on the Sound Test and then choosing which Area to begin the game.

Each stage is based after an element and are listed in order of the days of the week, starting with Monday (Area 1) and ending on Sunday (Areas 7 & 8). Area 5 is also a double meaning where "金" also means "money" matching the level theme.

Enemies in Area 2 are greatly different in both versions. In Japan version there are cigarettes and matchboxes that fire matches, while in US version they are replaced with petrol containers shooting missiles. The "fire pillar" ground enemies in later halves are also changed, from lighters in Japan version to refinery stations in US version.

The most notable change is the mid boss, which is a "value pack" of matchbox in Japanese version, but a more robotic object in the US version. The same enemy also appears in middle of Area 8.

The first form of final boss in area 8 is also different. In Japan version it somehow resembles a baby, but the US version is more grotesque. 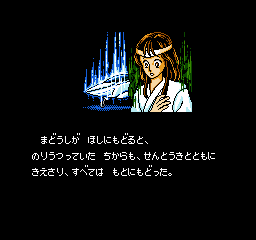 Once the mage returned to the planet, the power vested within her vanished alongside the fighter jet. Everything returned to normal. 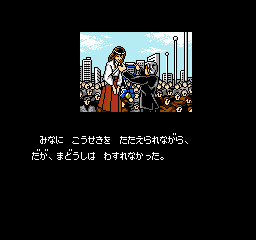 While everyone praised her achievements, the mage could not forget. 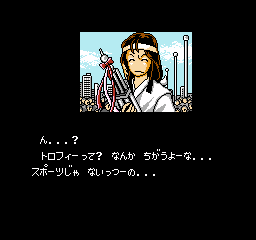 A trophy? There must be some mistake...

The Japanese and US staff rolls are different from each other. Interestingly enough, the US version still uses Japanese text.

According to the game difficulties, a few screens will appear along or after the staff roll. Interestingly, the "You haven't won yet" screen shows a granny who looks like the boss of Area 5, implying that she is the master evil of the mess.