Gunforce II is a run and gun game released by Irem in 1994. Being Irem Corporation's last arcade game, it is evident that this game was rushed out the door, lacking even a proper ending.

Although Gunforce II only supports two players, there is much evidence that it was originally designed as a four player game. Two unused palettes (bottom two rows), similar to those used by player 1 and 2 (top two rows), are loaded into color RAM alongside them.

Additionally, there are unused 3rd and 4th player graphics for the name selection icons (first row), the icons used to identify characters during gameplay (second row), and the icons that are used to show player rank on the assessment screen. (third row)

Further supporting that Gunforce II was designed to be four player, the area of the name selection screen where players' names appear was clearly made wide enough for four players: 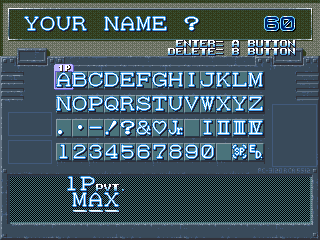 In addition, the assessment screen has four potential slots for displaying player information, but displays "NOW ASSESSMENT" in the top slot and "GUNFORCE II" in the bottom slot. The rank column on this screen has space on its right side for two player icons, where player 3 and player 4's icons were intended to go. (Notice how the last unused icons for player 3 and player 4 have their arrows facing left as opposed to right.) 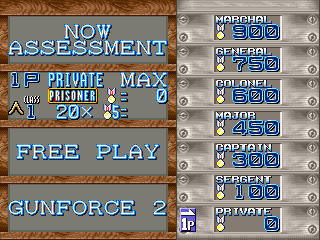 Finally, before the boss of mission 1, there are four crates that explode upon walking toward them, but only the last two reveal vehicles to ride.

It is unknown whether or not there is any code left in the game for supporting four players, or if it existed at all.

Two sets of both male and female character portraits are unused in the game. These likely would have either been used for an ending cinematic (the game just loops indefinitely) or as a way to choose what sex you want to character to be. This would be especially useful for a four player mode, as no extra character graphics for a designated third and fourth player exist in the game. (The game is designed to where player 1 is always male and player 2 is always female.)

An animation for a separated train wheel, similar to the animation used for wood plank debris, goes unused. How this would have worked in the game is anyone's guess.

Underneath the elevator in Mission 5 exist unused tiles written to the tilemap. It is evident they got fairly far into implementing this tileset, as there are clearly defined metatiles for it.

All of the unused tiles, displayed with each unused palette, are shown below: 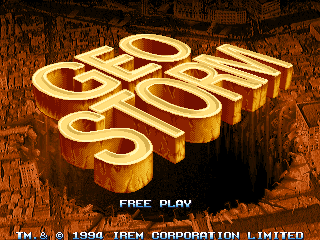 Despite this, Geo Storm still has the title graphics for Gunforce II in ROM and vice versa. Geo Storm does not, however, load the green palette used for the "II" in Gunforce II into color RAM and may not have the palette in memory at all.

Geo Storm also has "GEO STORM" instead of "GUNFORCE II" printed on the assessment screen.