Haunting Ground is a survival horror game about Fiona Belli, a 18-year-old girl, in a desperate attempt to survive and escape from a castle with a canine companion. The main enemies of the game are demented or psychopathic people whose purpose is to kill the girl.

Contrary to popular belief, this is not officially part of the Clock Tower series despite sharing many gameplay similarities with it.

ST_00D.PAC is an unused stage that can be found in the game files and is accessible only through cheats. The file number of this stage is adjacent to other areas in Belli Castle. Most of the stage model is missing textures with exception to the barred gates.

Although the game has unused items belonging to the inventory, some game files show images of absolutely non-existent objects.
(Source: Lionix)

An earlier version of the "Mountain of Rubble" cutscene. The unused version uses a different voice actor for Fiona, while in the final version she is completley silent. In addition, the cutscene has unique music that was removed in the final version, and the dirt effects when Fiona slips are brown instead of grey. 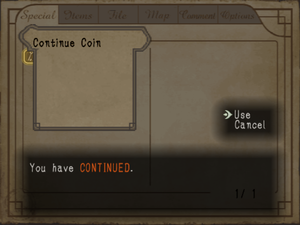 The Continue Coin in the game's menu.

Shows itself as a special item, though it has no texture and seemingly no use. The description only says "You have CONTINUED.", while trying to use it only gives an "I can't use this here." message. 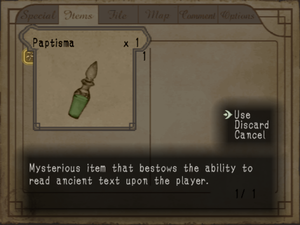 The Paptisma in the game's menu.

The description reads "An alchemic item created through an intense process of refining medallions. I wonder what it does?" This suggests the way to obtain it, through the alchemical refining room, though any combination in that room is completely vain.

After the first use nothing happens, but the description of the object changes to "Mysterious item that bestow the ability the ability to read ancient text upon the player." Given that many of the game's items take their names from Latin words, Paptisma may be derived from "baptisma", which means baptism or immersion, though neither definition really fits the item's description.

Still, it's clear that originally the object was supposed to give the protagonist the ability to read certain documents. But these are not present. The item's texture is the same as the Fortis and Remedium items, the only difference being that the liquid here is green.

The main antagonists of the game are stalkers. During the gameplay the player can hear some of their sentences. However, some of them are never played.