In the Groove (Arcade)

I can't believe it's not DDR!

Older development screenshots show a number of modes that cannot be selected in the final game as options. Duo mode, a two-player mode where each player has their own version of the chart, was one of these, and it seems to have survived long enough to actually have some work done on it. There is an incomplete set of mode selection graphics, and even some charts, still in the game data.

All of these charts were done by the same person.

The following is a list of all of the remaining Duo charts. There are no Duo Expert charts present.

In the Groove has two completely different unused versions of the "Select a Play Mode" screen. Paradoxically, only the oldest one still works. 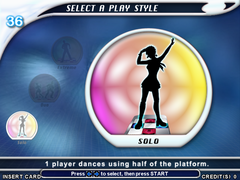 This is the oldest version of this screen present in the game data. Based on pictures released of various development versions, it probably was in use in mid-2003. All of the graphics specific to this screen still use the old gray-and-white style, and look completely out of place with the final UI elements. There's position data for a fourth play mode that isn't identified, as well as icons for several more. 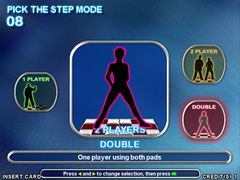 This is a later version of this screen made sometime after the redesign, dating it to early 2004. Trying to access this screen with no changes causes the game to crash instantly, as the screen type it uses was removed at some point. It can be made to load by tweaking the screen definition to use a closely related screen type. For the most part, it resembles a more rudimentary version of the final play mode screen. There are graphics for Duo mode, but they aren't enabled. 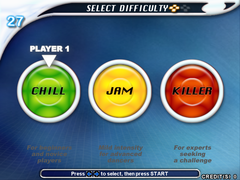 This screen was not shown in any prerelease screenshots. "Chill", "Jam", and "Killer" were the original three difficulty names; they were replaced with the more obvious Easy, Medium, and Hard later. Given that it has been possible to change difficulty on the music select screen in all known builds of the game, this screen was probably abandoned as useless before any pictures were taken. 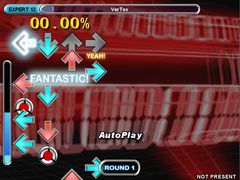 This noteskin is technically ITG's default noteskin, but the game forces the metal noteskin to be selected by default and this noteskin isn't available on the options screen. It resembles a rudimentary version of the final game's Cell noteskin, as well as the arrows in several very old screenshots.