Yuji Naka's 65MB masterpiece about a kiwi bird and some ivy.

Ivy the Kiwi contains four test models within its data. Three are cubes (test_box_100cm_green, test_box_100cm_red, and test_box_point_x), and one is a sphere (test_sphere_50cm).

For the most part, the models are practically the same, with the exception that one is a sphere and test_box_point_x happens to be a tad bit smaller than its fellow test cubes. None of the models have an associated texture; however, judging by the names, one can infer that test_box_100cm_green and test_box_100cm_red were meant to be green and red, respectively.

The Japanese version has a more "sketchbook" appearance than the versions released in North America and Europe. At the request of US publisher, Xseed, Prope made the international versions brighter and more colorful. 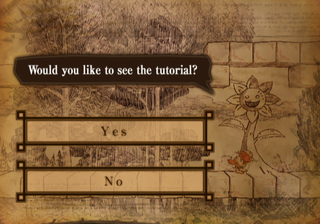 Here, the English-language tutorial is viewed in the monochrome Japanese game.

Included in the Japanese game are unused but seemingly complete English, French, German, Italian and Spanish localizations. These can be found in /content2/Layout, with filenames ending in _en, _fr, and so on. These localizations can be seen in-game by replacing the default Japanese files.