Izuna: Legend of the Unemployed Ninja

A game about Izuna, an unemployed ninja who one day, managed to piss off the gods a whole ton and now everything's wrong. 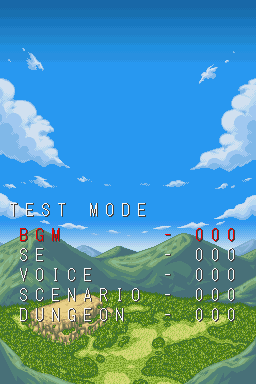 There is a debug menu with sound, dungeon, and scenario options, acting as an instant warp to various points and events in the game (at Lv.1...). To access it in the European version (and only the European version for some reason), use the following Action Replay code, and hold Select whenever you load or save the game file. For sounds, Left and Right change the sound and A plays the sound. B will fade out music. Dungeons and scenarios work similarly, except you can't use B to fade them out. What a rip-off.