Joust is notable for being one of the earliest NES games programmed by the late Satoru Iwata.

The Japanese title screen looks strikingly similar to those among Nintendo's early Famicom/NES games. The US version gave it a complete overhaul, including a new logo and font, and moved the menu so it displays after pressing Select once. (Unlike the other HAL-developed Atari games, Pressing Start now automatically starts game A, and bypasses the menu entirely.)

If the 1983 copyright date in the Japanese release seems unusual, that's because this game, alongside a set of 3 other Atari games (Millipede, Stargate, and a unknown title that was never released.) were originally created as part of an abandoned deal for Atari to distribute the Famicom in western regions. The development of these were outsourced to HAL Laboratory. Who ended up self-publishing the titles a few years after the deal was abandoned.

Of the three, this one had the most notable legacy in terms of Nintendo's early NES Games. As Iwata was later brought on to develop the console version of Balloon Fight, a game which shares numerous similarities with Joust in terms of gameplay.

A "WELCOME TO JOUST" screen was added for the US version. This also shows off the game's other new font. 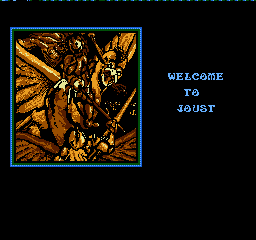 The graphics were greatly changed, adding much more detail.