Konami Rally is a racing game that was announced at E3 1999 as a PlayStation and Game Boy Color sequel to Hyper Rally, only for the PlayStation version to be cancelled before its planned release that November. The Game Boy Color version was released as International Rally.

A preview build of Konami International Rally Racing, dated May 7, 1999, was released as part of Hidden Palace's "Project Deluge". This build appears to be a time-limited demo, featuring a different HUD compared to the build shown in the trailer. It features three cars and one playable track.

Present in the DEBUG folder are CEP (PsyQ-generated executable), MAP, and SYM of the main executable.

While only one track (Finland) is playable by default, four more tracks are present on the disc - Sanremo Championship, Sweden (both seen in the attract videos at the start of the game), Acropolis (although it is possible it might have been intended for Australia, as Telstra is a trackside sponsor) and New Zealand.

The menu screens for the unused tracks are broken. While Sanremo can be displayed properly, it is missing the map: 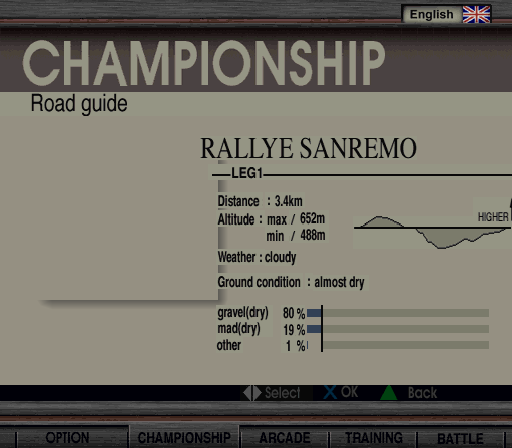 When the Mitsubishi Lancer is being selected, Marlboro (Mitsubishi Ralliart team's cigarette sponsor) is explicitly mentioned in the team's name, although not on the car itself (being replaced with barcodes). Had the game been released, the mention would have been likely removed.