Last Alert (Red Alert in Japan) is a run-'n'-gun game for the TurboGrafx-CD, most remarkable for its voice-acted cutscenes. It is best known for the US version's English dub, which features some of the worst best acting in the history of video games. 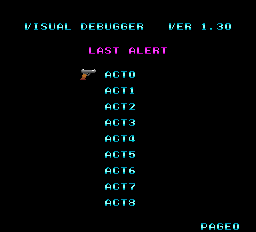 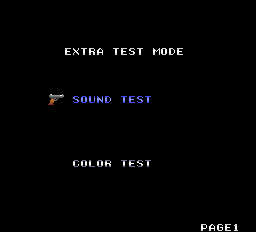 At the title screen, once the animation finishes and "Push Run Trigger" appears, hold Select. Then, press I, II, I, II, Up, Down. Finally, release Select and press Run. If done correctly, you will be taken to a two-page debug menu with a cutscene viewer, a sound test and a color test. Press II to switch between pages and I to select.

Two English voice tracks on the US disc are unused. First, in the Japanese Red Alert, there is pre-fight dialogue with the claw boss in Mr. Lee's compound. This was translated and dubbed into English, but was replaced in the US Last Alert by a short musical sting that occupies track 57 on the US disc. However, the dubbed dialogue is still on the disc in the same place as the Japanese version, track 8.

Also, Red Alert features additional dialogue with Dr. Garcia following the first boss fight against him. This was also dubbed into English, but it was replaced with another piece of music that plays from track 58 of the US disc. Again, this dialogue remains in the same part of the disc as the Japanese version, track 33.