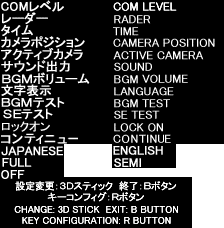 All options on the options menu have English equivalents following their Japanese entries. "Rader" and its options "Full", "Semi", and "Off" were replaced by "Lock On" and the radar images in final. "Language" and its options are also unused. Internally, a table with index values for options and lists of bitflags for each option is used, with an 0x80 bitflag missing for the language option. No unused flags are caught by code, however.

The no controller screen is dual-language. The "Last Legion UX" symbols for the English page lack a space found in the Japanese equivalent. Although there is no mechanism in code to select which option will appear, changing the subset offset in code from 0 to 1 will load the English in place of the Japanese. Color has been added to the background for clarity.

There are English equivalents for all controller setup options. These image offsets are hardcoded, using a base offset to the first in the set, multiplied by the bytesize of two sets worth of images.

Labels on this page are set via two table entries, with no mechanism to select between English or Japanese.

The rankings page has entries for all characters, not just the ones usable in story mode. Although it is possible to cheat other story mode characters, Metal Bomber will crash on selection since it does not have a story mode description. Interestingly, Metal Bomber is named "METAL BOMBERS" on this page.

There is an unused hit effect, unlinked in code.

Only during attract mode is Jankee's power stone named "Spiral". It is called "Blade" (in English) on the character select screen and (in Japanese) in his character description.

Bomberon has an unused attract mode character description but no mech image. 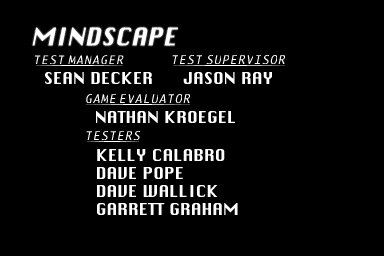 Mindscape has an unused credits page for game testing and evaluation. If Bomberon were added to the credits reel before Amphibian there would be a clear place to insert it. Bomberon is the only character in story mode that does not appear in the credits. 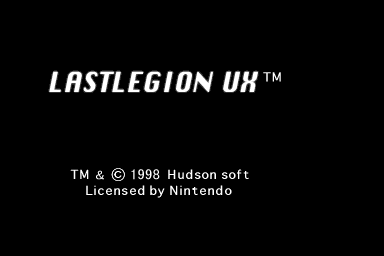 There is an older legal screen listing a copyright date of 1998. The title screen declares 1999.