Lazarian is a game with a three stage loop, and each stage is more bizarre than the last. It has nothing to do with these folk.

In the player graphics ROM are two frames of an entirely different, more contemporary ship design. The older ship has a cannon that's clearly facing upwards, even though the ship can fire in four directions. It'd look weird, is all.

The weird crystal/rock/flame things in the second stage were supposed to be animated. The second frame is never used.

There's an earlier, less detailed eyeball design left in the BG ROM. The early design has a solid color base, while the final design fits in with the giant structure in the final stage.

It's a ball. Perhaps you'd like to bounce it.

These would be alternate fuel indicators that would flash if the ship was running low on fuel.

Midway's version of the game, Lazarian, features some much appreciated enhancements over Laser Battle.

New graphics marking the scores of Player 1, Player 2, and the High Score were added to the HUD. The High Score is always visible in Lazarian.

Instructional text for working the name entry screen were added to Midway's release. These instructions are present even in the game's attract mode, which is a little awkward, but whatever works. 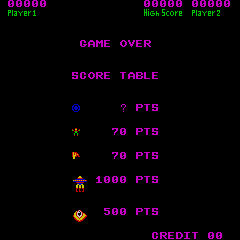 This score table was added by Midway. There's no such screen in Laser Battle. 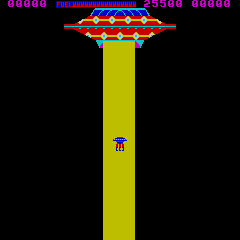 In Laser Battle, there's a short intro with the player's ship descending from a mothership. Since the mothership tiles were overwritten with new graphics in Lazarian, this intro had to be cut.

Before a level starts, in Laser Battle, the current mission (loop) number and the number of player ships are displayed. Lazarian moves these counters to the bottom-right and bottom-left corners of the playing field.

The first stage is the only one with any significant changes. The captured UFO in Laser Battle was replaced with a countdown / bonus display. This lets the player keep track of how long they have to blast a meteor before it's no longer vulnerable.