Little King's Story is an action-adventure lifesim RTS-RPG hybrid brimming with personality, created as a passion project by a collaboration of developers and companies including Yoshiro Kimura and Yasuhiro Wada.

Due to its troubled development, this critically-acclaimed Wii title has many unused elements.

Some information here is shared with the Little King's Story Wiki, with permission from its admins: https://littlekingsstory.fandom.com/wiki/Beta_Elements 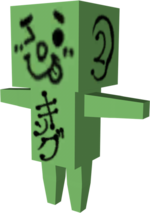 This friendly-looking green fellow is a test character, as evidenced by the texture being named test_chara02. The Japanese writing on the chest says "king", suggesting that this may have even been a placeholder for the player character. There are four copies of the model (cb0080, cb2000, cb9999, and ms9998), the last of which is located in the enemy folder. Of the four copies, cb0080 has an extra animation called c__test, shown above. Note that the animation does not match the model's proportions and twists one of the hands incorrectly, suggesting that the animation originally belonged to a different model.

There is an early version of Corobo, divided up into parts like most of the characters in the game. All of the files are given the number 0001, while the final Corobo pieces all use 0002. When the pieces are combined together, the crown is shown to be centered atop the head, perfectly upright, unlike the the final model. The early model is also a bit smaller overall.

The early crown has a much thinner brim and less ornate details than the final version.

The most obvious difference with the face is that Corobo's eyes were originally meant to be red. Other differences in the early version include a larger chin, lack of light coloring on the undersides, and less hair on the right side. There are also no eye animation frames.

The early version is much simpler than the final version, hardly suitable for a king.

There is also a different version of the body with smaller sleeves, straight hands, and a bigger neck. There are four identical copies of this model, named cb0003, cb0004, cb0005, and cb0006.

The early scepter is much simpler in design and features a spherical jewel at the end. It is also noticeably larger and lacks the alternate color options that the final version has.

Corobo, Liam, and Verde have models of their appearance in the intro cutscene, leftovers from when the prologue was meant to be playable. Howser does not have an extra model as his outfit always remains the same. 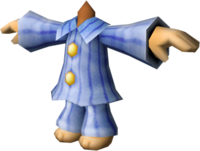 Corobo's pajamas, as seen in the intro, named cb0007. The proportions match the final body model, and it presumably used the normal head model.

Besides the obvious missing decorations, Liam's prologue model also has some subtle changes compared to the final version. The prologue model has less polygons in the face, ears, and feet. The skin is also a bit darker, possibly to compensate for an increase of brightness in the game's lighting.

Curiously, his model used in the Game Over screen funeral is based on this version, though his paler skin is hard to notice in the dark lighting.

The stick Liam wields in one of the unused cutscenes is also here as ce0020.

Unlike Liam, the only difference with Verde's prologue model is the outfit. She even has her pencil and book, indicating that she would have allowed the player to save the game even during the prologue.

Her funeral outfit for the Game Over screen is based on this version, with the pencil and book removed.

In ce0040, there is a small knife, presumably for Verde to use in combat. The knife is only a little bigger than her pencil. 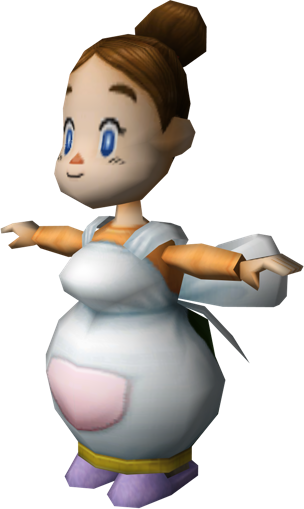 Character model cb0150 is Corobo's mother, likely from the cut prologue. Her relationship to Corobo is confirmed in the list of character names found in the debug files with the entry コロボの母 ("Corobo's mother"). She has a set of unique animations, with actions such as working around the house and scolding.

Like Liam and Verde, there is a redundant copy of her head. Strangely, the face texture has added blank space on the bottom compared to the body model's texture, so it displays incorrectly on the model.

Many character models in the game are designed to use a combination of separate body, head, headgear, and equipment models. This is mostly for use with the Job system, but also applies to some characters such as Corobo and Howser. However, most of the important characters have their head and accessories as part of their body model, yet they still also have the separate parts that go unused. Many of the unused extra pieces are identical to the meshes used in the final model, but some of them have minor differences signifying changes late in development.

Liam's unused head is based on his prologue model, described earlier.

The extra version of Kampbell's mallet has less polygons in the head, using only four polygons around rather than six. The texture is also twice as big as the final version. 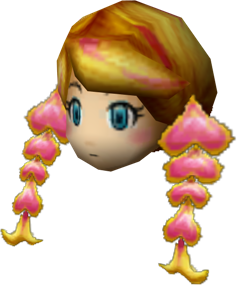 The extra copy of Princess Apricot's head (cf0170) features a different hair model that uses texture transparency to define the shape rather than polygons. The hair is fixed at a downwards angle, rather than being controlled by bones. The rest of the model is mostly the same, other than the face.

The head texture lacks the final facial expression, which is used near the game's ending. This suggests that the head models were phased out before the ending section was finished. All of the other princess faces share this same trait.

The model cb0170b has a copy of Princess Apricot with an alternate face texture. The face is less refined and only has very few expressions. The rest of the model is identical to the final version, including the fully-modeled crown and hair, which suggests that the low-poly head and crown were either created afterwards or had the face texture updated.

Like the extra head, the tiara model (cc0170) uses transparency instead of polygons to define the shape. Very strangely, there is a copy named cc0060, which is the number used for Skinny Ray.

Like the other princesses, Boquet's head model lacks the final expression.

The groove in Boquet's cap is sharper in the final version. 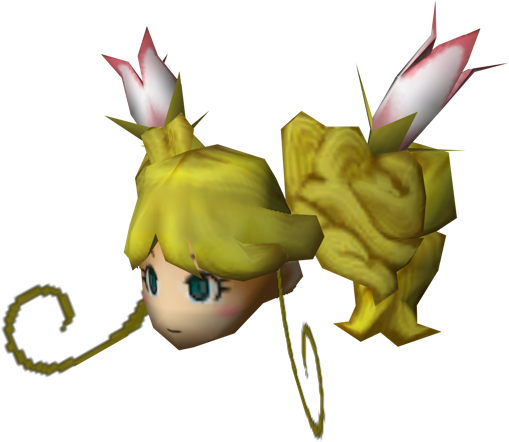 Similar to Apricot, Kokomo Pine's head uses texture transparency for her curly hair rather than polygons and bones.

Like the other princesses, Kokomo Pine's head model lacks the final expression.

Like the other princesses, Shizuka's head model lacks the final expression. Her irises are also different, lacking the glazed-over look of the final version.

The only difference with Spumoni's head is that her skin is slightly lighter than the final version. It was likely adjusted for the same reason as Liam.

Like the other princesses, Spumoni's head model lacks the final expression.

The texture for Martel's strawberry accessories is twice the size of the final version, but the mesh itself is the same.

Like the other princesses, Martel's head model lacks the final expression. There is also an equipment file (ce0220) for her containing a dummy model.

Like the other princesses, Ferne's head model lacks the final expression. There is also an equipment file (ce0230) for her containing a dummy model. 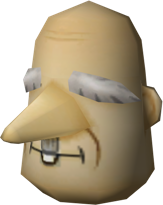 Ginger's extra head (cf0240) features a number of changes compared to the final version. The most notable differences are the bald head, straight nose, missing jowls, smaller eyebrows, and simpler texturing. The final version has no modeled scalp beneath the hat.

His facial expressions were almost completely redone, with only the eyes remaining the same. 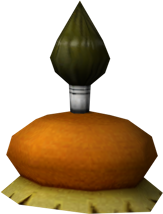 The extra hat (cc0240) is simpler in design, with a much less messy brim, and has a much smaller paint brush than the final version. The shading on the brush's tip is also simpler. 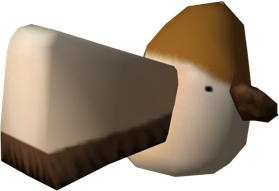 Ginger's extra head (cf0250) is mostly the same, other than having a different eye texture and being smaller in size. Unlike Ginger, the final version of Mr. M's model has a bald scalp hidden under his hat.

The old version of the facial expressions all feature very tiny eyes, which would have been hard to see from the game's typical camera view. While most of the expressions were redone to feature much bigger eyes, a few (presumably unused) expressions keep the old tiny size. Strangely, those remaining tiny eyes were moved down slightly and partially redrawn. 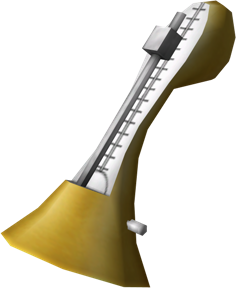 The extra hat (cc0250) features a different color scheme and a much larger metronome weight. The hat is also smaller than the original, fitting the smaller head.

The wake up music isn't technically unused, but only a few notes play in-game. Slightly more of the track plays in the PC version.

Appears to have been intended for an alarm clock.

Resembles other music from Mr. M.

Amecomi translates as "American Comic". This music is from one of the channels that appears in TV Dinnah's cutscene, featuring a superhero saying "Love and Peace". This channel has a full looping track in the game's files, as with the other channels in the cutscene, so was likely intended for the TV Dinnah battle.

From another channel in TV Dinnah's cutscene, specifically the one where a man says "Because I love you!" Likely intended for a similar purpose as M22_Amecomi.

Possibly an unused castle music, which is heard in some unused events.

From an unused cutscene where Corobo is playing in his house and gets lost in a forest after chasing the rats.

Similar to M45, and seems like it would be used when talking with a princess.

Several letters from Omelet exist, which hint at a side-plot about his relationship with Shizuka. Despite being unused, these are still referenced by the Alpokian Eggan:

Note: an unused event is related to these letters, where we can see Shizuka's dog, John, digging something up in the Worrywart Kingdom.

A letter from God saying that Corobo and Him are the same, and they should have fun together until they grow old. This was likely removed to make the ending chapter more mysterious and keep the twist hidden from the player. However, it is also possible that this was intended for a scrapped post-game.

A letter from Long Sauvage after his defeat, stating that he has kidnapped hikers: