Little Samson is a rather obscure game with mechanics similar to Mega Man, where you play as four characters with different abilities. It's actually pretty good.

This statue is technically used, as a background decoration, in the second wizard stage. However, because of an oversight, the palette it should be using is entirely black at that point in the stage, turning the proper color shortly after it gets offscreen. 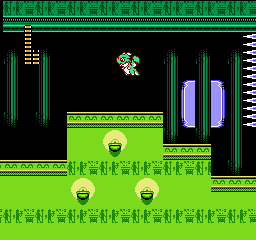 Where it should be.

A skull sprite loaded among the rest of the wizard's tiles. It vaguely resembles their projectiles and a completely different enemy, but it's never used.

On powerup/reset, the Japanese version immediately jumps to the introduction cutscene. In the international versions, the title screen appears for a moment beforehand.

The US and PAL versions have the order of the letters altered, dropping the vowels on the end and adding the "?" and "&" symbols. This affects the password screen and the passwords themselves, as they have the same values but use the different font, so the letters shown are different.

A little bit of cleavage was removed from this boss.

For some reason, two of the background sparkles got edited. 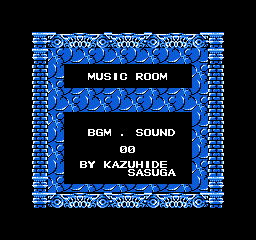 The password NB50 (KAZU in the Japanese version) brings you to a Music Room. Up and Down change the number, A or B both play the selected track.