Logical Journey of the Zoombinis

Logical Journey of the Zoombinis lets you guide adorable blue creatures to a new home, away from their tyrannical dictators. Your only resource is your logic skill.

Many audio files are noticeably longer than they are heard during gameplay.

The full background of the Lion's Lair level shows spaces for 20 steps, with the extra four located at the back near the entrance. 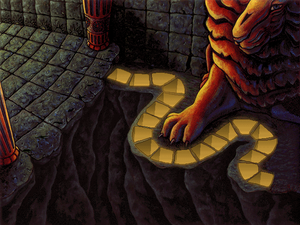 v1.0 was released in Europe in January 1996. It is available in English, French, and German.

v1.1 was released in the US in February 1996, with the following changes:

In addition, a number of names were changed:

Released in 2001 by The Learning Company as Zoombinis Logical Journey, with the following changes: