This is a sub-page of Luigi's Mansion (GameCube).

The Effect folder isn't what you expect... The folder contains a mix of an unused door, a blue effect, and a canned variation of the ghost glow used in the game. It's one of few unused folders in the game.

An early door model for the unlocking door cutscene since the animation syncs up with the final one. This model is strangely located within the Effect folder, and the art style doesn't really fit the game. The model comes in two different formats: "door.mdl" and "door.bmd"; with each model having an corresponding identical animation of the door opening: "door.bck" for "door.bmd", and "door.key" for "door.mdl".

A blue effect with a twirling animation.

There are three unused door objects within the game.

This door is pink and features heart designs. Early footage of the game showed that this door was originally intended to lead to the Nursery, the room where the first area's boss is found. It has a unique cutscene for being unlocked, showing the heart-studded door instead of the normal door model. The heart door model has an ID of 07. There are four unused models for the cutscenes when trying to open it while it is locked and unlocking it: codemo07.szp, nodemo07.szp, oodemo07.szp, and hodemo07.szp.

A blue door featuring stars. Early footage of the game reveals that this was originally the door that led into the Twins' Room. Like the heart door above, a unique unlocking cutscene is present for this door that uses a highly detailed version of the star door rather than the model for the normal doors. The star door model has an ID of 08. There are four unused models for the cutscenes when trying to open it while it is locked and unlocking it: codemo08.szp, nodemo08.szp, oodemo08.szp, and hodemo08.szp.

The lab door seen in the Portificationizer and Gallery rooms has a dedicated cutscene model. However, it just appears to be a placeholder since lab exploration was removed earlier in the game's development. The metal door has an ID of 05. There are four unused model archives for the cutscenes when trying to open it while it is locked and unlocking it: codemo05.szp, nodemo05.szp, oodemo05.szp, and hodemo05.szp. 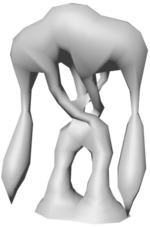 The model elh is a tall, faceless, twisting creature. According to the entries, it was compiled a month after Luigi's Mansion appeared at E3. It has six animations. It has no textures, nor any UV maps that would support textures, meaning it either relied entirely on shaders, particles, or never reached the texturing phase. Elh has four particle effects dedicated to itself.

The model shadow is an earlier version of Bogmire. The textures are the same, but the appearance is remarkably different. It has longer wings with skinnier flabs of ectoplasm hanging down, a defined lower lip or chin, and a visibly sorrowful and eerie expression. It also has a typical wavy ghost bottom, whereas the final Bogmire has a blob bottom.

The file bmario is a second model of Mario, stretched to Luigi's proportions and equipped with back straps for the Poltergust 3000. The geometry of the model is simpler than Mario's final in-game model. The model shares the same early animations that luige uses. It possesses a functional actor; when spawned in-game, it appears under a transparent ghost-like shader and makes use of an oversized hitbox, making direct contact impossible. It's worth noting clones of the equipment actors exist assigned with the same "b" prefix and ghost shader, possibly putting them and bmario under a same category.

While the meaning of the prefix isn't clear, the player-like animation set, shader and other oddities could suggest some sort of scrapped doppelganger -- or otherwise its usage in multiplayer mode. It was recompiled again during major changes to the designs and content in June. 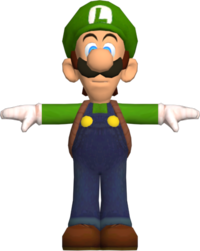 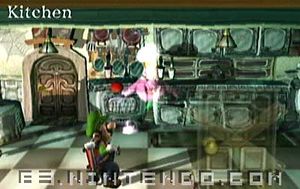 The tomato as it was seen in a prerelease version.

tomato has two animations: "wait" which leaves the tomato stationary, and "rot" which rotates it.

A white flag with no known purpose. Its only animation is of the flag waving around called "wait.key". 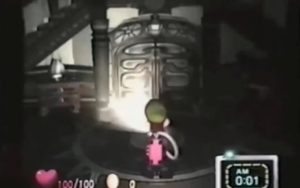 The early Poltergust 3000 as it was seen in a prerelease version. 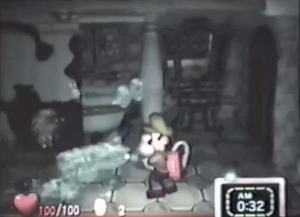 The early Water Nozzle as it was seen in a prerelease version. 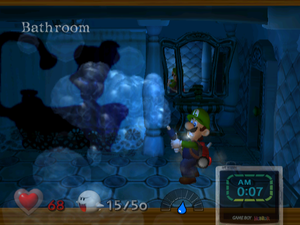 A mock-up recreation of the screenshot above, with the old model reinserted.

The Air Nozzle would have likely replaced the normal vacuum nozzle when spraying without elements using the L trigger.

Technically, these are seen in the final game being used to launch at the moon; except those ones are a different model called "star.mdl", which are static and yellow. Ball however, had an entirely different purpose; they can be seen in the E3 2001 trailer bouncing around. Ball still has the skewing animations which were used to give the creature a bounce effect, and has a number of colors for diversity. 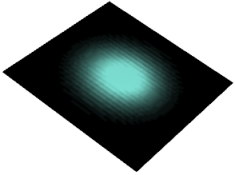 Presumably, an early glow effect for the billiard balls in the Billiards Room. What's odd is that it's not in the game's ".pcr" particle format. 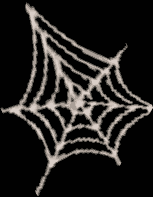 An early spider web model. It could've been possibly hanging from the ceiling in the Foyer near the Area 2 door, as similar nets could be seen during the chandelier crash scene in the Spaceworld 2000 demo and the first Foyer shot in the 2-minute E3 trailer. However, by the time of the playable E3 demo, it was seemingly removed.

A very peculiar Luigi model. It holds Luigi's classic color scheme, along with looking like a creepy Matryoshka doll. It is an early version for the model of Luigi's head that appears on the Game Boy Horror's maps.

An early version of the mansion map on the Game Boy Horror. It seems similar to the original model, however there are various differences which resemble the mansion layout from the E3 2001 demo; plus unseen areas.

In BF, it seems the Breaker Room was originally accessed from the main hallway instead. In 1F, the Butler's Room and the Hidden Room were connected by a doorway; E3 doors are present. In 2F, aside from the scrapped Foyer Area 3 door, a similar shortcut door existed in the Wardrobe Room. In 3F, it appears both sides of this floor were connected through doorways, while in the final game you have to cross the balcony. A completely removed room can be seen to the balcony's left side.

Located in the ".dol" (executable) file in the USA and Japanese versions, and in Game/sdata_X/guidemap.szp in the European versions are four identical Game Boy Horror maps of the Underground Lab. Each model has a different point of origin, and highlights a unique room to determine which one Luigi is currently in when checking the Game Boy Horror map. Two of these maps are inaccessable as Luigi can only check the Game Boy Horror map while in Training, or the Gallery.

This map highlights the entrance to The Lab. 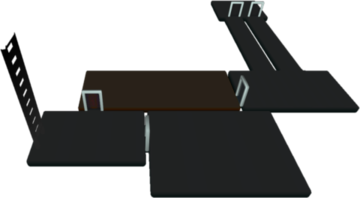 Some models in the game were intended to have alternate textures.

There is an unused texture that replaces Toad's red dots and turns them into green dots, and co-exists with a similar green-capped dialogue box icon and spawnable actor named kinopio2. 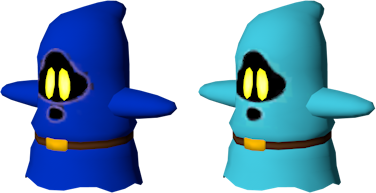 While the Ghost Guys appear in a number of colors, none of them are blue or cyan. The textures for these particular colors are the last two in the model's texture list. Unused parameter files for these variations remain named heypo9.prm and heypo10.prm. 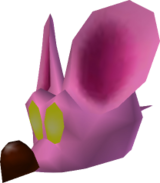 Mice can appear in different colors like blue, purple, and gold. However, there's also an unused pink-colored mouse labelled "rat_3", coupled with an unused pink mouse actor called "rat2". It can still be generated like other mice types.

While portrait ghosts go through the Portrificationizer, they appear as blue spirits before getting stamped into portraits (excluding Mario, and Bowser and King Boo). However, each portrait ghost has its own unique model/graphic for going through the machine (except Neville who uses the blue spirit).

An almost identical version of the desk seen in the Parlor; the only difference being the back left leg (front right in the render) using a higher quality texture than all the other legs. 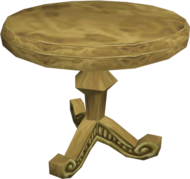 The Mirror Room has a lack of furniture minus the drawer at the right end of the room. While there is no indication where it would have been located in the room, it may have been in the middle or a corner of the room.

A red padded variant of the Observatory chair. 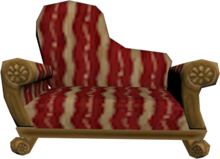 It seems that the Billiards Room was going to be a bit more expansive and have more furniture. It fits in well with the stool seen at one of the corner tables. 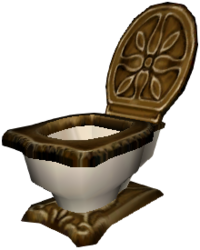 While yes, there is a toilet in the washroom; that toilet is initially closed until Luigi interacts with it. This toilet is always open, and could be seen in E3 2001 gameplay.

Not a whole lot can be said for this particular model. It might have worked in conjunction with the projector or as a second sort of activation method to make the ghosts appear. 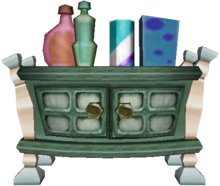 This drawer might've been cut due to the space it occupied. It has an animation for opening and will work as such with the correct furniture move type.

Seen in multiple areas in E3 footage; this vase can still be seen in the Kitchen on the shelf, in the fridge, and on the shelf in the Butler's Room. Interestingly, the model was later repurposed in Super Smash Bros. Brawl's Luigi's Mansion stage, alongside the regular vase.

A slightly larger version of the brown vase in the room. 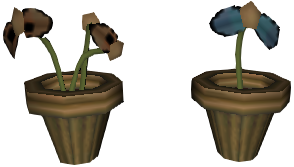 A ladder which would have been very fitting for the theme of the room. Quite a shame it goes unused.

According to footage, it seems like these were included late in development when the Game Boy Horror worked as a first person camera, and got cut from the game shortly after around the time the money counter was implemented, nearing release. Considering their simple design, they were most likely scrapped in favor of the more artistic portraits. 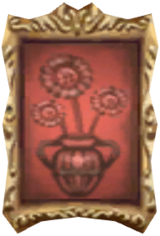 While this painting does exist in the Ball Room; that one is map geometry, not interactable by Luigi apart from scanning. 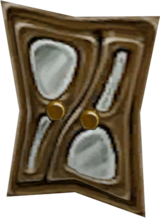 While this particular version of the Washroom does not have a medicine cabinet that can be opened unlike Area 2, it does have a similar medicine cabinet which is a much simpler model with no animation for it to open.

A smaller, straightened mansion picture. Similar to the Flower Painting; small mansion paintings exist in the Washrooms, but those are map geometry, not interactable by Luigi apart from scanning.

A set of trapdoors that open when interacted with.

There is a wooden board used to cross the water in the Pipe Room, however that board is map geometry, not interactable by Luigi. 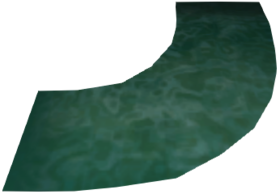 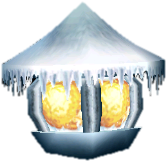 An unused Ice Lantern leftover in Cold Storage. It was likely meant to hang from the ice stalactite in the center of the room.

While it was never seen in E3 2001 gameplay or any trailers, it is possible this was an earlier addition judging by the style of the mobile. It would most likely function the same as the mobile in the Twins' room.

While Teddy Bears are used in the game, they are actors that attack Luigi, not furniture.

While a few toy vehicles are displayed on the Twins' shelf, a toy tractor is not. 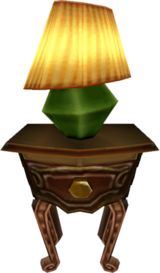 The guest room does have a small table, but a clown doll sits on top of it. 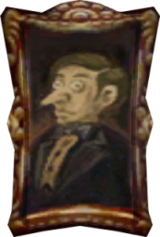 Framed pictures are leftover in both the Fortune-teller's Room and the 1F Washroom. 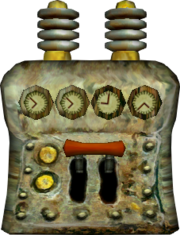 A duplicate of the breaker box is leftover in the Basement stairwell. 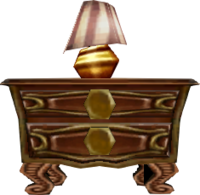 A duplicate of the drawer seen in the Foyer is leftover just above- in the Parlor hallway. 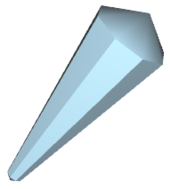 A primitive icicle that's loaded with the Cold Storage room. While icicles are present in the room, those icicles use the model Map\map2\j3d_effect\k09-tsurara_s. While this model is technically loaded, its purpose is currently unknown.