Marvelous: Mou Hitotsu no Takarajima is an adventure RPG in which the player switches between three protagonists to explore a verdant island and unlock the secrets of Captain Maverick's hidden treasure. While the game was never officially released outside of Japan, a fan translation was completed in 2016. 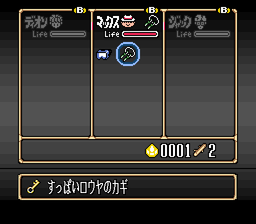 In Chapter 3, Max accidentally swallows a key. After retrieving the key with a magnet, the player acquires an item called the "ロウヤのカギ" (Cell Key). However, the game also contains a seemingly unused item known as the "すっぱいロウヤのカギ" (Sour Cell Key). It may have been intended to open the jail cell that appears in Chapter 4. However, in the final game, the door to the cell can be shut by stepping on a switch. The order in which the items are listed in the game data doesn't synchronize very well with the game's story, so it's not very useful when it comes to making inferences. 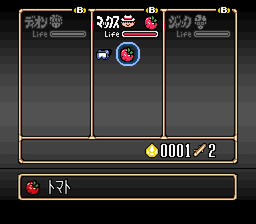 There's also an alternate "トマト" (Tomato) item with a different graphic. In the final game, the Tomato is a healing item that can fall, float, and sprout, but it can't be picked up and put into the inventory for later use. This alternate tomato, however, can be accessed through the inventory and set to B. Using it appears to have no effect, however.