15 unlicensed games for the low, low price of only three installments of $49.95!

Two versions of the Maxi 15 were released in both the US and Australia.

Any instances of the name "Maxivision" in REV0 were replaced with "Maxi 15" in REV1. The font was also changed in REV1, and adds a drop shadow. The phone number was changed for the Australian release, but only in REV1. Strangely, all of the text on this version was moved 8 pixels to the right.

Also odd is that the phone number on the American versions is different to the one shown on the infomercial. All versions refer to this cartridge as being volume 1 of a series, though no further volumes were ever made. 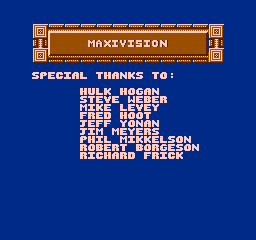 This screen was removed from REV1.

The menu was changed somewhat between versions. Notably, REV0 has no visible border on the right. This is a remnant of an early version featured on the infomercial, where it originally contained 30 games. The font used for the game list and descriptions also has a drop shadow added to it, as well as a highlight on the top left corner of each character. Oddly, the menu scrolls 24 pixels further to the right on REV0.

Both of the Sachen developed games featured on REV0 (Pyramid and Double Strike) were swapped out (for Blackjack and Death Race) on REV1, as AVE didn't actually have the right to distribute Sachen's games on multicarts.

The Maxi 15 version made some tweaks to some of the separately-released games for the Maxi 15.