Mazinger Z is a shoot 'em up based on the immensely popular and influential Mazinger Z franchise. Play as Mazinger Z, Great Mazinger, or Grendizer (or, rather, play as their pilots piloting those units) and stop Dr. Hell from his most dastardly scheme yet - stealing your quarters!

Normal and damaged icons for the three playable pilots. Palettes are incorrect or nonexistent. These are early, and they can be seen in early screenshots. The final game's portraits lack their pilot outfits, although they can be seen wearing them in the cutscene graphics. 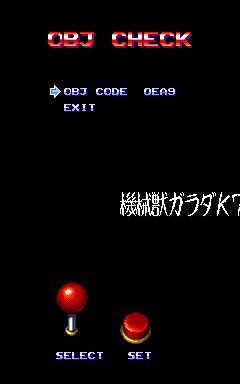 An unused graphic for Garada K7's name, the first stage's miniboss. Although all bosses have their name shown before the fight, Garada does not get this treatment. Doublas M2, the miniboss appearing alongside Garada, does not have its name in the game at all. 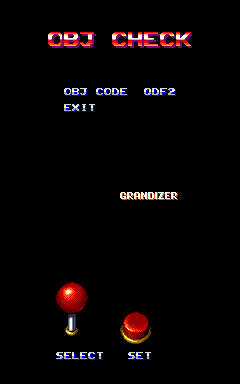 An unused name tag for Grendizer that spells its name wrong.

The Japanese logo features the standard Mazinger Z logo, while the English version has an all-new logo and centers the Z. The copyright text is also different between the two; the Japanese version has it as a full graphic, whereas it's just standard text in the English set. This leads to the somewhat funny mistranslation of Dynamic Pro into "Dynamic Pl".

The Japanese version has text in the demo for the Photonic Power Lab (Mazinger Z), the Science Fortress Institute (Great Mazinger), and the Space Science Laboratory (Grendizer). The English set removes these.

Oddly, the English set has a tutorial in the demo, featuring a joystick and buttons that react to the demo's movements. The Japanese version lacks this entirely. 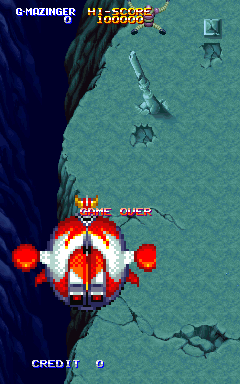 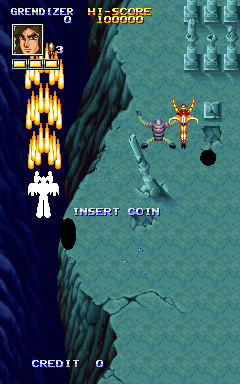 When the demo starts and the unit is flying in, the name in the scoreboard briefly shows Great Mazinger's name tag, regardless of whether the demo features Mazinger Z or Grendizer. The actual game does not do this, so it's unknown why the demo does.