Ever wanted to play a game where you endlessly mow the lawn? Me neither. 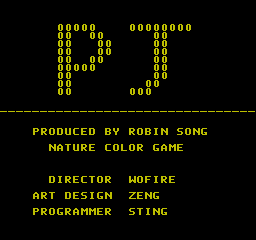 As with many Nice Code games, pressing Up, Down, Left, Right, holding A + B (pressing A before B) and pressing Right on the title screen will display a credits screen until a button is pressed, which will then return the player to the title screen. Nature Color Game is one of several aliases used by Nice Code, and PJ most likely refers to the Power Joy series of Famiclones which many Nice Code games have been released on.

Two versions of Mowing exist, which appear to be identical aside from the background music.