Mushroom Kingdom Fusion is a platformer that fuses traditional Mario-series gaming with...pretty much every video game franchise under the sun, it seems. Bowser kidnaps Peach (again), so Mario and Luigi set out to rescue her (again) - except this time Bowser actually had a pretty decent reason to kidnap her, and it affects far more than just the Mushroom Kingdom...

Cue a huge adventure with a ton of playable characters using a variety of play styles, filled with awesome music, great level/graphic designs, a big dose of nostalgic levels (including some based on games that aren't 2D platformers), and some pretty unusual ideas.

Despite positive reception pretty much throughout, MKF was cancelled in March 2015 (some time after the last version, v0.53, was released) due to lack of manpower, real-life obligations, and burnout. The biggest issue, though, was the use of older versions of Game Maker (7, 8, and 8.1) as the engine/development software - they not only don't play nice on Windows 8.1 and higher, but they were never meant for projects as massive as MKF, resulting in the software frequently crashing; the game was also too far along in development to be easily ported to Game Maker Studio or later, and the source files can only be edited by Game Maker 8.1, which has not been supported for quite some time. A sister game which sticks far more closely to traditional Mario gameplay, Super Mario Fusion: Revival, remained in development until being cancelled in March 2017 (the last release being v0.5.3r53) due to many of the same issues that plagued MKF.

The project was revived by D-TurboKiller in late 2018 after the game's source code was released, with the first release (v0.6) massively optimizing the game and its assets among other changes. While initially putting the game on indefinite hiatus in late December due to having gotten steady work and becoming progressively more frustrated with Game Maker, the project came back to life in February 2019 and can be found on itch.io (where it is currently up to v0.7).

Note that this page currently covers v0.53, the last release by Fusion Team.

(Note that this map was spliced together from two screenshots, hence the duplicated UI.)

This additional map can be found by using the "Next Room" debug cheat on the World 9 map. This is World 0, Twisted Reality, the intended final world of the game and home of the main antagonist's organization The Legion, but it's very unfinished: no music plays, the background is an animated static effect that does not scroll, and none of the levels can be entered or even display names (though many of them were given names during development; the very strange-looking level at the end is The Castle That Doesn't Make Sense, hence its unique design).

Although this world's music track is defined in MKFmusic.ini, it's commented out and references a file that doesn't exist, ogg_world0map.ogg. It was to use the track Hyuponia from Klonoa 2, which was present in v0.41.

On top of that, the pipe to World 1 leads here: 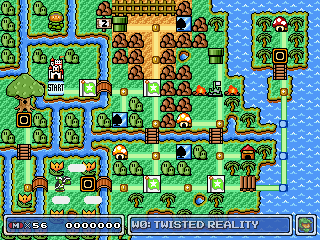 That's the player on the island in the top-left corner. There are no paths between the pipe and any other levels, which means the only way to escape is to use the free map movement buttons in debug mode.

Luigi has a duplicate (J) of his Fire Luigi sprite folder (B) with black lines for the eyes instead of the blue-and-white eyes in the used version.

Wario has duplicates of all his sprite folders (labeled WA, WB, etc.) and lives icons for Waluigi. Though the duplicate sprites are identical to the used versions, the lives icons indicate that Waluigi was to be added to the game.

Link has sprites for a form wearing the Keaton Mask from Ocarina of Time and Majora's Mask. Unlike the other folders that are labeled by letters, the folder is simply called Keaton. However, Link's leaf form in some earlier versions was indeed the Keaton Mask, with the Deku Mask being the original Tanooki form. It also has spinjump sprites from Mario in the folder, for some reason. In addition, Link also has an unused small form from when he did not use a health system and instead was closer to Mario's powerup system.

These overworld and pickup sprites reference an unused form for Simon Belmont based on Knight Man. They were used in v0.41 for this exact purpose, but changes in Simon's gameplay led to it and a Halo Suit being scrapped in later versions. No other remnants exist.

"Vinny" was a debug character in early versions of the game. He was a copy of Mario with unique sprites that was invincible and essentially locked into a Tanooki Suit mode with infinite flight. He was removed at some point, but his sprites remained through v0.53.

He only has small and big sprites, with no other powerups.