This article can not swim. Game Over.

NOTE: When entering the following names, you must move the cursor using the most direct route to the next letter and press A to select it. Any mistakes will cause the game to lock out all input on the item select screen!

In the Japanese version, when naming a new file, enter the name ONSEN with a space at the end. The text "ONSEN " IS CREATER. INPUT HIS PARTNER'S NAME. will appear. Now, enter the name HAHI with two spaces at the end. This will take you to an item select screen, where you can choose which power-ups and symbols to start the game with. Selecting all the symbols will start you on the second quest.

After selecting your items, you'll be taken to a special function screen with three options. The first option, HIGH SCORE RECORD CLEAR, simply clears the high scores. The two HAO JUMP modes enable (FF) or disable (00) some alternate jumping behavior: MODE1 prevents you from controlling the height of your jumps (e.g. tapping A will always give you a full-height jump), while MODE2 allows you to hold the A button to jump repeatedly. Both options can be enabled simultaneously.

When the game was ported from the FDS to the NES, a number of things were removed or changed, largely due to the drastic decrease in storage capacity (64KB ROM versus 128KB rewritable disk).

The Japanese title screen features the game's logo in front of a rather nice landscape, with the game's poorly-translated English title (it should be "Hao's Mysterious Journey") and copyright info scrolling below it. The US version is very bland by comparison, featuring only the game's title made of a single tile and the usual copyright info. 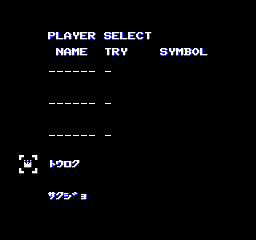 The Japanese version had the ability to save your progress in one of three slots, thanks to the rewritable FDS disk format. This was replaced with a continue option on the title screen in the US version, as the cart did not use battery-backed SRAM. (In the above screenshot, TRY is the quest the file is currently on, and SYMBOL shows the symbols you've collected.)

The sound effects were changed in the US version, largely because many of them utilized the extra sound channel present in the FDS hardware.

There are fewer music tracks in the US version, and the tracks that were carried over from the Japanese version were greatly simplified. This is likely due to the limited ROM space.

The Japanese version features a slideshow-like intro displayed inside the title screen frame with text scrolling below. This was completely removed from the US version.

Hao starts with no items in the Japanese version. The US version starts him with the Roll of Magic (originally found near the beginning of the game) and the Faster Boots (originally found in the third castle), which let him attack and move faster, respectively.

In the Japanese version, the first world has blimps in the background with "DOG" (the Japanese publisher) on them. These were removed from the US version, though the graphic still remains in the ROM. 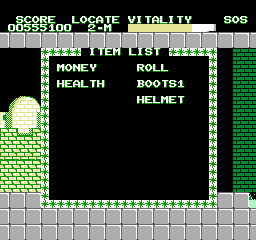 In the Japanese version, pressing Select while the game is paused allows you to see which items you have. This does not work in the US version.

Some palettes were tweaked in the US version.

The Japanese version contains ice blocks that can be pushed using a special item called Magical Medicine. These blocks were removed from the US release, rendering the Medicine useless.

The worlds were made shorter and easier in the US version.

The Japanese version contains a total of three worlds and six castles. The third world was removed from the US version, leaving it with only two worlds and four castles. 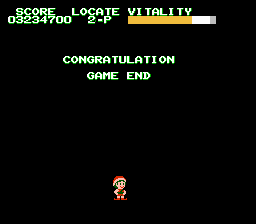 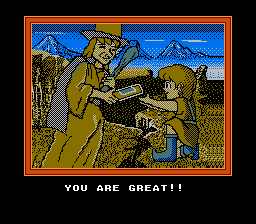 The Japanese version only has one ending, which is similar to the intro. 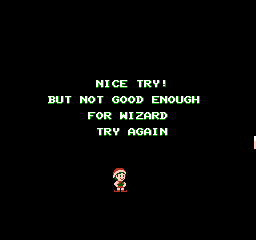 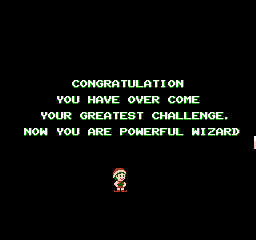 The US version has two endings: a "bad" ending, and a "good" ending. The first three times you finish the game, you'll be presented with the "bad" ending. After slogging through the game four times, you'll get the "good" ending... which is just a different message. Congratulation.