Taito's first target shooter. There's a bunch of bandits and bullets and bonuses and balloons and you shoot them all. Well, ideally.

One anagram of N.Y. Captor is "Apt Crony". Coincidence?! 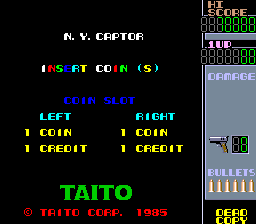 There are two different piracy flags in the game. When either flag is set, the text "DEAD COPY" will flash at the bottom-right corner of the screen. 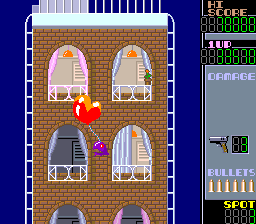 The first flag is set when the "TAITO" part of the copyright string is altered. The game saves an encrypted version of the string to RAM and then performs a checksum on that string when the player shoots the Monsta holding balloons. If the checksum doesn't add up to 20, the first piracy flag is set, which will trigger the following gameplay tweaks: 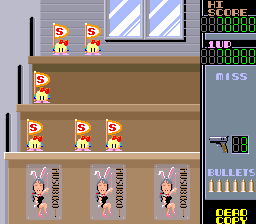 The second flag takes a lot longer to trigger. The subroutine at 0x7D83 will gradually check ROM addresses 0x0000 to 0x4000, one byte at a time, with each byte added to E2CE in RAM. The following actions will trigger this subroutine: 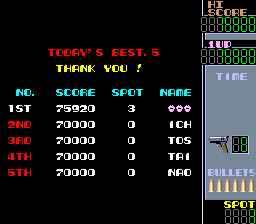 Trying to put the name "SEX" in the high score list will overwrite the name with three lips and play the Monsta & Balloons jingle.

While this type of name substitution is standard practice for Taito, this also triggers something extra: The bonus stage in Shot 4 will be replaced by the all Miss Chack'n bonus stage from Shot 28.

Multiple instances of the programmers hiding their names in the code. Wily programmers. The first is in the main CPU at 0x07F83:

A second, shorter message is near the start of the subCPU at 0x001F:

The longest message, at 0x7B48 in the subCPU, even has ASCII art of an earlier title!

"Mudan copy wo kinzuru." roughly translates to "It's forbidden to copy without permission".