NDDEMO, called Welcome to GameCube World!! in-game and informally known as "Peach's Castle", is a 2001 tech demo that Nintendo distributed to developers.

The player controls a red arrow in a unique version of Peach's Castle (based off the Super Mario 64 design), with each room showing off different graphical capabilities of the GameCube. Metal Mario, Goombas, and dolphins make appearances along the way.

Based on a Readme file included with the demo, the version documented here is v1.08, dated September 12, 2001 (a mere two days before the GameCube's release).

The entrance uses a different door than the other ones, with no wooden plaque.

Can be accessed by using a door at the bottom of #2 Bump & Shadow SPIRAL STAIRCASE, but the wooden plaque is missing.

Can be accessed by using a Warp Pipe in #3 Antialiasing HANGAR, but the wooden plaque is missing. 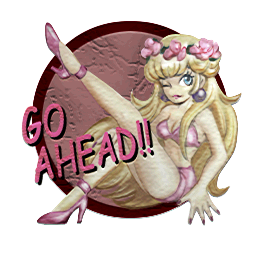 A sign of Peach presenting some area, found in /TEX/1_BI_STE.DTX. This is notable for being the only official risqué piece of media of Princess Peach.

(Discovery: Yoshi2, also creator of the Python Script used to extract it)

Setting the current camera mode to 0x03 (RAM address 8013F9F4) causes the camera to become unresponsive until changed back. This camera mode is listed internally as CAM_MODE_MARIO_VIEW, which may imply it was meant to be used in the Metal Mario statue room.

In the directory /audio/ from the filesystem, a C/C++ header file named nddemo.h can be found:

It was generated four months before the GameCube's release, on June 5, 2001 (DolphinExport uses the MM/DD/YYYY date format).

A short summary of version updates is present in the readme.txt included with the demo.