Pat Riley Basketball is a basketball game featuring... the coach of the Los Angeles Lakers...! Aside from that, the game doesn't actually include any NBA teams or players. 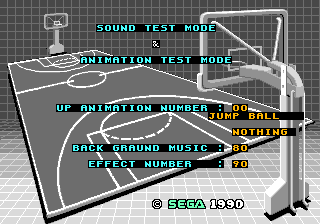 In the US and European versions, pressing A+B+C on the title screen opens up an options menu. This isn't present in the Japanese version. Instead, a much more basic (and much more geared toward debugging) menu is available, but not without hacking.

Start exits the menu and returns you to the Sega screen.

Furthermore, at ROM address $5328A is the following code:

This is the equivalent to the code that handles the button press that opens the options menu in the US and European versions. The two differences are:

A series of error messages are stored below the ROM header.

Worth noting is the mention of "NKOICHI", which is likely composer Koichi Namiki. However, "SEBA-HIKO" (Hikoshi Hashimoto) is the only person credited for "SOUND" in this game.

The title screen was completely redone. Just about the only similarity is the "Push/Press Start Button" text flashing on the title screen.

Most of the team names were changed between the Japanese and US/European releases.