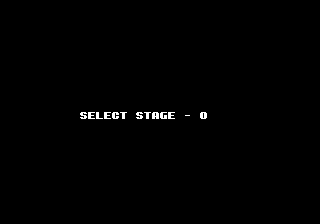 You can now use Up and Down to select a starting stage between 0 and 59 and then press Start when you've made your choice. As an added bonus, you start the game with 255 wild card blocks instead of the usual 1-4 that you'd get based on the dip switch settings.

This is automatically deactivated by the following scenarios:

Setting 0x0036 to any non-zero value will activate a simple screen freeze function. This stops the clocks and stops processing inputs, but the music will continue to play.

Put the following code in MAME's plotting.xml cheat file to activate this feature: 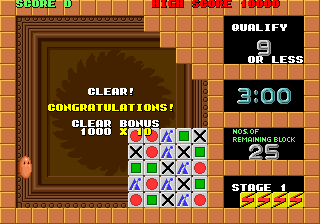 Setting 0x0037 to any non-zero value to activate a stage skip feature. You can instantly complete the level that you're currently playing by pressing P1 Start and P1 Up.

Put the following in plotting.xml to activate this feature:

Please note that for this function to work, the stage select has to be active as well.

For whatever reason, if both 0x0036 and 0x0037 are non-zero, the stage select will always be in two player mode.

Ordinarily the game's built in ROM check would fail if you modify bytes in the code; however, the dev team kindly put extra code in to check if locations $0036/$0037 were modified, and skip the ROM check accordingly. This only works in the MAME sets known as "World set 1" and Flipull (the JP version); the other sets ("World set 2, protected" and "World set 3, earliest version") do not have this extra functionality, and thus modifying the bytes at $0036 and $0037 will cause the ROM check to fail. You'll want to activate these codes after the ROM check on these versions if you want to try these debug functions.