PoPoLoCrois Monogatari is the first JRPG game of the PoPoLoCrois Story series for the PlayStation. It stars the main character, Pietro, as the prince of PoPoLoCrois Kingdom who fights against the underworld to rescue the soul of his mother.

The game contains a leftover debug mode that can be accessed both upon starting a new game and during gameplay via GameShark codes: 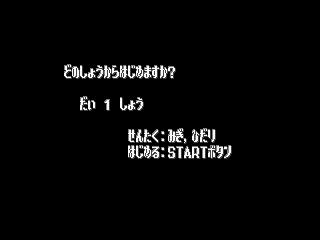 A chapter select menu is initiated when starting a new game with debug mode enabled by default. Chapters one through five can be selected with the Left and Right inputs on controller 1. Pressing Start on controller 1 will start the game with the selected chapter.

Activated upon pressing the Select button on controller 2.

Activated upon holding the R1 button and pressing ✖ on controller 1. The in-game menu will be unstable and automatically select whatever is highlighted, and most dialogues are skipped throughout gameplay.

Two different variations of the coordinate display screen are present. 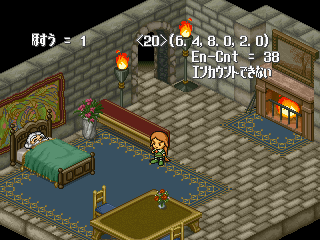 Pressing ▢ on controller 1 once will show a coordinate display screen. The top left value increases based on how many encounter/whole number coordinate steps are taken. Pressing R2 on controller 1 will reset the top left steps counters. On the top right side, the very top contains both a current map value that is presented inside an angle bracket, while the values in parenthesis represents coordinates (X-Axis, Y-Axis, Z-Axis). Just below the top right value is an encounter count, which decreases per one whole number coordinate step.

Pressing ▢ on controller 1 a second time will show the same coordinate display screen as the one above with the exception of the encounter count being removed. The flag for encountering enemies per one whole number coordinate step is also paused during this state.

Pressing the Select button on controller 1 will initiate a battle. By default, the enemies spawned during battle will be the same as those found normally at the player's current position on the map.

Pressing the Select button on controller 2 will reset the game back to the title screen.

Two different variations of the map layout screen are present.

Pressing the ✖ button on controller 2 once will show a map on the left side of the screen that details the current position on the map. The values represent what Z-Axis position the player will be upon entering that region. Orange color "0" represents a region that should not normally be accessible. 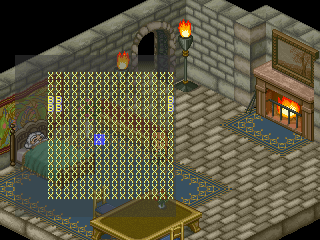 Pressing the ✖ button on controller 2 a second time will display the same visual map with notable differences. Each tile that does not cause a change in Z-Axis is marked with an "X" value. Tiles that are represented as "B" usually refer to a flag that signals a room change in most cases.

Five different variations of the GFX/Animation Viewer exist (three of which are the same). 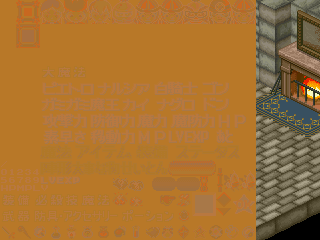 Pressing the ◯ button once on controller 2 will show a generic tile viewer, which can be navigated using the Left and Right inputs on controller 2. Pressing R1 here will grant the player 1,000,000 gold and will continuously be given if R1 is held. Note: This particular window applies the same for the third or fifth time of pressing ◯. 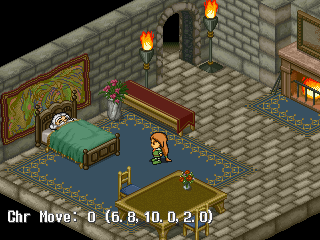 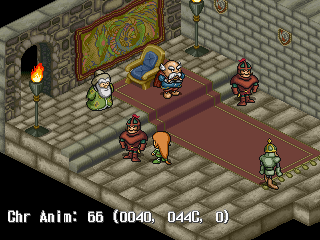 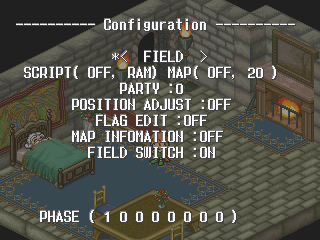 Pressing the L1 button on controller 1 will display a screen containing general map flags and other debug functions. The D-Pad will move through the selected options, ▢ decreases value, Δ increases value, ◯ applies changes, and ✖ will cancel changes.

The first line depicts the current game mode that can be either selected as <Field> (default gameplay) or <Theater> (removes all characters, objects, and room change flags). Setting to <Theater> requires "SCRIPT" in the line below to be turned "ON."

The second line represents a section for script and map changes. Enabling either option will also turn on Position Adjust below (which can be turned off afterward if desired). Modifying the MAP values will change the current room that the player is in.

The fourth line "POSITION ADJUST" represents a general flag editor. These flags are mostly associated with game and story progression.

The sixth line affects whether map changing or event initiations will be active or inactive. 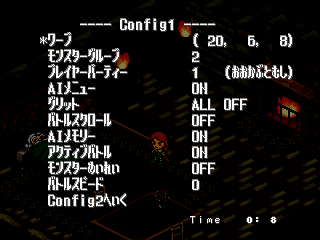 This screen, activated by pressing L2 on controller 1, contains both map and battle related functions. The D-Pad will move through the selected options. For most options, the vertical D-Pad inputs will move through the selected options while horizontal inputs will change the value increments by 1 (exception being parenthesis-based values). Pressing the ◯ button will save the changes while pressing ✖ will cancel out of the menu. 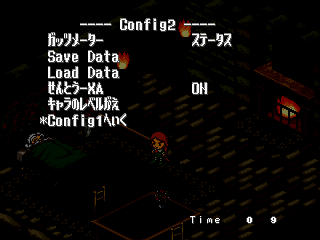 The second page of the Config screen is activated when pressing the ◯ button on Config2へいく. 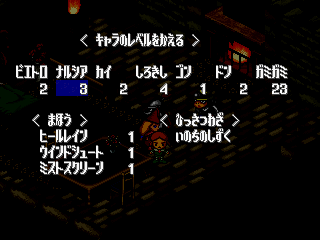 This screen is activated when pressing the ◯ button on キャラのレべルがえ. By default, the character's level region is first highlighted. Different characters can be selected using the left and right input directions. The levels can be increased with the up direction, and decreased with the down direction. Pressing Δ while in this screen will switch over to the skill list level region. 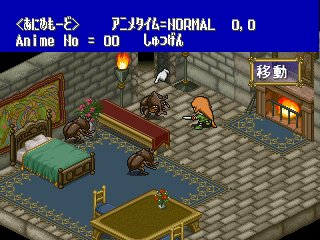 During the battle phase, pressing the L1 button on controller 1 will display a blue screen on top which displays animation properties of the character objects along with the current speed. The bottom right text shown within the debug screen represents the name of the animation state (which contains different information per character.)