Pocket Gal Deluxe is an arcade pool game with adult images between rounds. 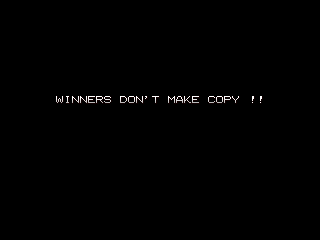 There's a security check at 0x0014CA that checks the values at four memory locations (0x0006E4, 0x0006EA, 0x0006EE, 0x0006F2) to make sure their values match against hard-coded values. If they don't, you'll be shown this snarky screen, obviously parodying the ugly FBI "Winners Don't Use Drugs" screen of arcade games from the 90's. 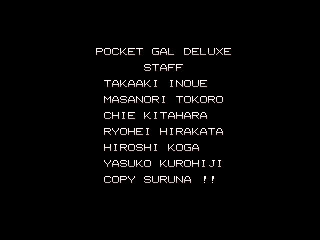 Among the text strings is a list of developers. This string is not referenced anywhere in the code, making it normally inaccessible. The last line is Japanese for "Don't Copy!" The text is fully formatted to appear on-screen, but the "Don't copy" line implies it is never meant to be seen in-game, and would only be seen by someone poking in the data (like a game pirate).

There is a fully functioning debug menu in the game. On the menu, Game Mode returns you to the main game. Debug Mode is a gallery of all the images in the game. Sound Mode is a sound test. Trick Mode is a level select for all the trick tables.

It can be accessed with a MAME cheat: