Power Blade has you play as NOVA, a buff white soldier guy who must stop aliens from harming Earth, armed to the teeth with...boomerangs. 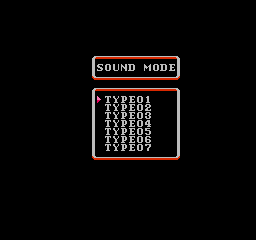 At the title screen, hold Left + A + B on Controller 2 and press Start on Controller 1. Press Up/Down to select the music and A to play it.

The sound test looks a bit different in the Japanese version, and most of the music tracks have names instead of just "BGM01"/"BGM02"/etc.

The US version is pretty much a completely different game compared to the Japanese one: different hero, different enemies, different levels, different graphics etc. and a significant improvement in gameplay controls. There are a few new songs for the intro and ending. A few cutscenes have been entirely modified to be a bit less cartoony. There’s now an enemy life meter for when you fight bosses. You now need to hunt down an agent in each stage, which will allow you to open up the boss door at the end of the level. There is now a time limit, replacing the score counter. You run much faster, jump much farther, and your boomerang power meter regenerates much quicker. Your boomerangs will always carve through foes, scoring multiple hits, without a power-up. There are now items that will allow you to throw multiple boomerangs at once, wherein you could only throw one in Power Blazer. Your attacks have also been made more versatile, as you can throw your boomerang in any direction. You can also find a power suit, which encases your hero in armor, allowing you to shoot out extremely damaging energy waves, and also shields you from three hits before it disintegrates. There’s now an additional Expert mode. If the player falls off the screen they will die. In Power Blazer the player simply falls back to the previous area.

The map screen was completely overhauled. It's now far more helpful, as well as more detailed.