This page details prerelease information and/or media for Sonic Chronicles: The Dark Brotherhood.

Sonic Chronicles had a... troubled development, to say the least, if the infamously bad soundtrack didn't clue you in.

In a behind-the-scenes article, several artwork of the various areas in the game are shown. Present amongst these however includes this area who's aesthetic resembles that of the final game's Green Hill but which has a radically different layout. 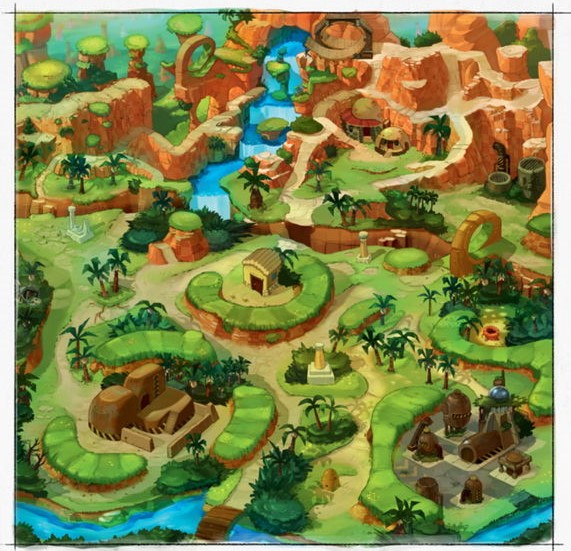 More screenshots of the game would be revealed at the Nintendo Spring Media Summit in 2008. The screenshots appear to be based on slightly different builds from one another as notable differences could be observed between them.

These screenshots are theorized to be from a slightly later build as while it has characteristics to the previous screenshots, we see several new additions.

Several differences can be seen in this early piece of dialogue:

As opposed to the final game's intro which is made up of gameplay montages and several static graphics, the game was originally to have a 2D animated opening cinematic. Small portions of this opening being worked on could be seen in Behind-the-Scenes footage released during the game's development and short snippets of it appeared in an animation reel. The full version of this unused intro was posted by animator Jonathan Cooper on Twitter on December 21, 2021. Little official reason was given as to why the early opening was removed, but the background music used in it was kept in the final game.

Retrieved from "https://tcrf.net/index.php?title=Prerelease:Sonic_Chronicles:_The_Dark_Brotherhood&oldid=1143380"
Categories:
Cleanup > To do
Games > Games by content > Prereleases