The "Numbered" Builds are a collective of builds featuring a display in the top-right of the screen. The function seems to act as a display to view the difficulty variables, and it would have been used when the game was in QA.

There are at least two numbered builds from different points in development.

Within each section is a table showing the different values the display has been seen to take.

Several publications received copies of the game built some time between the GameSpot build and the second demo build. This appears to be the SCEE-region "Preview" version.

A small handful of the publications which featured the build are the Official Italian PlayStation Magazine issue 52, PlayMania issues 21, 22 and 34 (which are also mixed in with a few GameSpot screenshots), ConsoleMania issue 100 and GamesMaster issue 101. 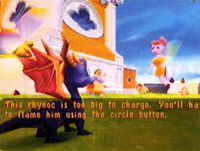 The font colour is seen to match the one used in Spyro 2, placing this build earlier than the second demo. Zoe refers to buttons by their actual names rather than by symbols of the buttons.
The gem placement seen seems to be later than the one used in the earliest demo version - specifically, there's more gems, which likely puts this build later than the GameSpot build, which seems to have used the earlier (smaller) gem total.

The egg icon seen in this build seems to be half way between the one seen in the earliest demo and the GameSpot build, and the one seen in the final game. Like the earlier sprite, it's pointy at the top, but the sprites are closer to the actual texture of the egg than the green one used in the demo. They still don't quite match the ones used in the final, though, as none of the egg sprites have a large lavender blob in the middle like this one does. The actual egg model itself uses its final look in this build. 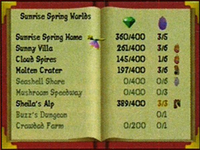 The shape of the egg icon is different again, and appears to once again show a slightly darker purple blob on the middle-right. Crawdad Farm is included in the Sunrise Spring section of the Atlas instead of getting its own place, and the icons on the right hand side appear to be incomplete. Cloud Spires now has its final name.

Sgt. Byrd is also seen to still use his earlier model, in some of the screenshots.

Unlike the previously mentioned builds, the first of the three values here are always non-positive. While this could indicate that the build used here is a different (perhaps later) one, it's also possible that all the other screenshots showed positive values due to the previewers being really bad at the game (see the conclusion section).

An issue of the German magazine "Video Games" shows some cut dialogue used by Sheila in Sunrise Spring. This dialogue and animation is still present in the final game, but goes unused due to the interaction being shown in the form of a cutscene instead.

A trailer used on a number of European demo discs - later re-uploaded as an official trailer for the game on Insomniac's YouTube channel - appears to be from the same version of the game as the SCEE preview build. This is supported by the fact that the trailer was likely produced by SCEE, and the fact that at all times the entire HUD is covered up, giving the video a widescreen look with Spyro in the centre of the screen rather than the lower third of the screen.

Looking over all the sources of information for this build, the table below lists which levels are the ones known to be present at this point in development. There are likely other levels which were not shown in any of the known pre-release materials.

Reviews of and ads for the game also often featured the numbered display. These appear to be a slightly incomplete - but likely very late development - version of the game. 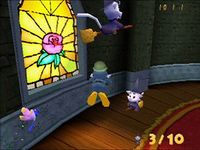 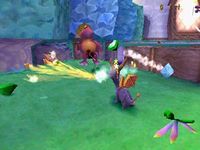 Some reviews of the game used what are assumed to be official screenshots sent out to several publications. The font colour used indicates that these would have been taken after the final font colour was decided upon, making them relatively late development.

Magazine adverts from around the time of the game's release contained a couple screenshots also featuring these numbers.

It's not clear if the image of Fireworks Factory is displaying a positive or negative 10.

Strangely, the HUD mentions that the player has 150 eggs, meaning they must have obtained the game's final egg. However, the section containing this egg cannot be entered unless the player has all 20,000 gems, which they clearly do not. Super Bonus Round can be entered early using the in-game cheat codes, but not even using the cheat codes can get the player to the sublevel where the egg is hidden. It's not clear whether the requirements for reaching the final area were slightly different earlier in development, or if a tool was used to reach this score.

One of the screenshots used on the back cover of the American release's packaging shows Bentley's yeti boxing minigame, albeit with the top-right corner of the screenshot obscured. The full screenshot was later seen on the packaging of the 2001 release of the Crash Bash and Spyro 3 demo disc.

(Source: This particular scan comes from a user on Reddit)

Builds used in a few TV adverts also seem to feature this display. It's a bit too blurry to see what they say, though, but it should be noticed that the footage of Mushroom Speedway looks like neither the second nor the third value is a 1, something that hasn't been seen very often in these builds.

Around 18 seconds in some screens are shown which seem to feature the number display. The numbers are too small to read, though.

Due to the similarity of these values to the difficulty value, it seems likely that the display was used to experiment with the adaptive difficulty.

Specifically, in the final game, the difficulty is handled by three values:

The latter two values always take the values 0, 1 or 2 and tend to be equal aside from under specific conditions. Generally speaking:

These perfectly match the values seen in the pre-release materials. Not only that, but it also suggests the values in the advert which are hard to read due to its poor quality are actually most likely "-40 2 2".

It's possible that the display was also used to test that the difficulty cheats also worked as intended.