In this issue of Nintendo Power a single screenshot of the compilation was published, it showcases World 1-2 from Super Mario Bros. and in it, Mario is wearing a red shirt and blue overalls (as is with his established modern design) instead of a blue shirt and red overalls (which is how he was colored in the artwork for Super Mario Bros.). Considering that all the available pre-release footage shows the game in a near-final state, it's safe to assume the clothing colors were a last-minute change. 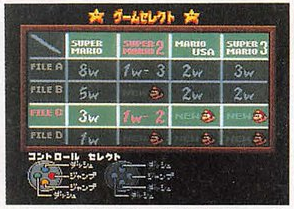 The "file select" screen in this magazine shot looks drastically different from the final version. Judging by the way the menu is set up, it seems that the game originally had four global save files that held your progress in all four games, rather than each game having four unique save files. Interestingly, the graphics used heavily resemble those found in Super Mario World 2: Yoshi's Island. The graphics for this screen were found in the gigaleak.

Here the Super Mario Bros.: The Lost Levels Game Over screen is shown, it looks nearly identical to the final version but the continue options' text has different spacing and the wave dash (〜) was changed to a chōonpu (ー) and Luigi's sprite is different: he is wearing blue overalls and the little finger of his left hand is raised.

Issue 52 of Nintendo Power features extensive coverage of All-Stars with an overview of the game and a mini-walkthrough of The Lost Levels, in the magazines' 6 pages dedicated to the compilation quite a handful of changes can be seen. 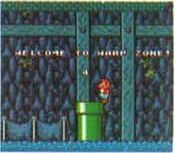 The underground background has unique tiles at the bottom.

The background of World 8-1 looks nearly identical to the final version, except many of the rocks are reddish-colored and there seems to be floor at the very bottom of the background.

World 8-3 has mushrooms in the background, the final game instead has clouds and a bright sky.

This map of 8-4 shows Princess Toadstool's chamber looking almost identical to its NES counterpart, missing the big cage from the final design. Princess Toadstool is also using a different sprite with a shorter stature, more resemblant of her appearence in the NES version, this early sprite can be found unused in the final game.

Mario's mugshot in the Bonus Room's background was touched up in the final game. Interestingly, Mario's hand in the prerelease version looks identical to Luigi's hand in his variant of this sprite.

The remastered version of Super Mario Bros. 3 was also shown in this magazine, in this shot the title screen is missing its background, the logo's size and shadows look closer to how they did in the NES version, the logo's colors are more saturated, the trademark is positioned like the NES version and the bush on the left is casting shadows. The graphics for the bush shadows still remain in the final game's data.

The Hammer Bro in the world map has a brown shell and brown helmet. In the final game, both are black.

This alternate design for the bushes in World 1-1 is more detailed. 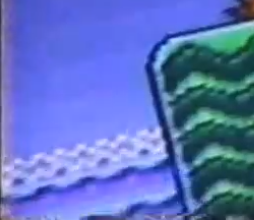 In this commercial, for a very brief moment you can see the waterfalls in Super Mario Bros. 2 looking more similar to how they were in the NES version, being made of repeating 8×8 tiles. In the final version, the waterfalls are composed of more tiles. 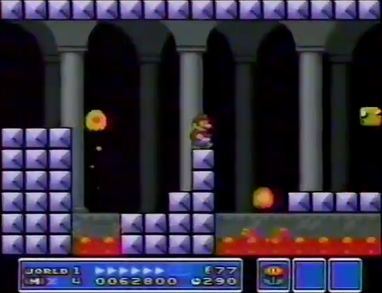 In Super Mario Bros. 3 the fortress background's columns are positioned higher up, sitting on top of a floor, the graphics for that floor can be found unused in the final game.

That same tape also showcases a different color scheme for Super Mushrooms, being white with red spots, the same color scheme used in the original version. In the final game, you can only see this color scheme in the inventory. 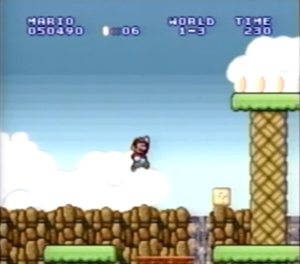 This footage of Super Mario Bros. shows the rocks in World 1-3's background being dark brown. The final version is much brighter and blends in less with the foreground.

Here a more finalized version of the Super Mario Bros./Super Mario Bros.: The Lost Levels Game Over screen is shown with the continue options having the same spacing as final. It's also important to note that Mario is wearing blue overalls like the rest of his sprites in this build. 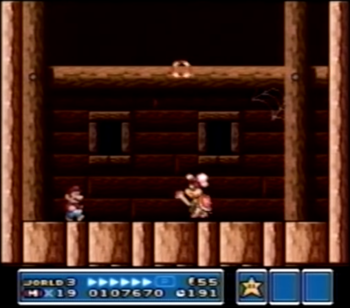 The Super Mario Bros. 3 part of the footage shows that the windows in the Koopalings' boss room were lighter in color.

Super Mario All-Stars US Back Cover 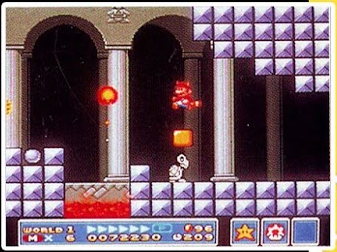 Here the mushroom card is using the NES version's color scheme, being white with red spots. Additionally, the different fortress background from the American Commercial can also be seen here.