Super Mario World had an interesting development, starting out in 1988 with a very different overworld and closer connections to Super Mario Bros. 3. The game was built off of a port of Super Mario Bros. 3 that was created to test the Super Famicom's hardware capabilities.

At least two early builds of Super Mario World were shown at the first Shoshinkai on July 28, 1989. These are photos taken of the projector screen, published in 1989 issues of Famitsu and Famimaga. While some elements are pretty much done even at this early point, others were changed - some significantly.

Various remnants of early development, including some elements shown below and some that aren't, are present in the final game, the SNES Test Program, and the SNES Burn-In Test Cart. Many more assets were found among the 2020 Nintendo leaks, and are covered here.

The only known difference between the two builds seen at Shoshinkai is Mario's sprite work.

Features Mario with red shoes and no gloves, similar to Super Mario Bros. 3. There are also visible eyebrows, and a smiling expression on his face during the jumping and running animations.

Colors aside, the logo is pretty much exactly the same as the final Japanese version, as is the wood border (although the border is one block taller here). Behind the logo, however, is a brown map-style drawing of the mushroom-shaped island used as the overworld at this point in development.

Very different than the final, aside from the border and Mario's overworld sprite. On the top side of the border is Small Mario walking (albeit using very different sprites), the lives counter, the stage number (using a World-Level style similar to the pre-Super Mario Bros. 3 games), and (for whatever reason) coin and score counters. 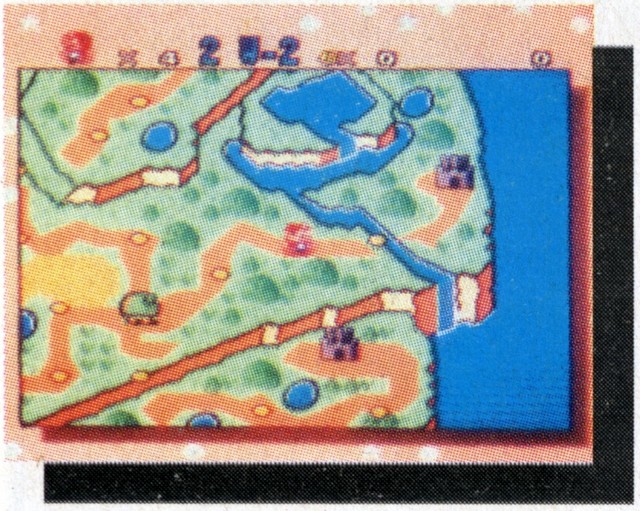 There are four "Worlds", at least three of which have a Fortress (seemingly looking no different than the final) at the end. The domed mushroom-like house is clearly a starting point, not unlike the START tiles of Super Mario Bros. 3, with World 2 to the right.

Interestingly, the prologue cutscene of Super Mario World: Super Mario Advance 2 ends with a shot of the first world as it appears in the in-game overworld before fading to a brown map-style drawing of it, after which the logo appears.

The backgrounds of the outdoor areas are similar to those used in the final, aside from the presence of circular "donut" clouds. Judging from their positioning between shots, they were likely implemented as a separate independently-scrolling background layer.

The HUD is very similar to the final version. Only the Bonus Star counter is missing, with the coin counter in its place rather than above the score, and the lives counter is right-justified rather than centered. 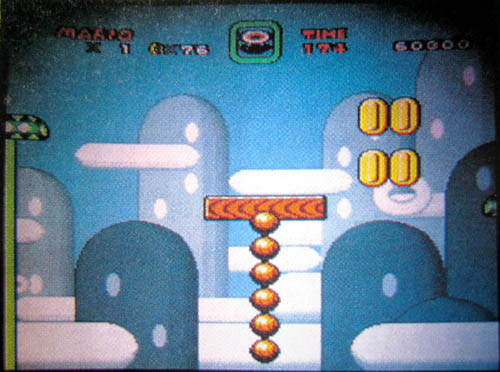 Large coins similar to the Dragon Coins are present, though whether they actually are Dragon Coins is unknown. A common feature in early screenshots is round, donut-shaped clouds in the background. The Fire Flower resembles its appearance in Super Mario Bros. 3, albeit with a miscolored pixel in the middle. The top of the spinning platform is also much thicker. 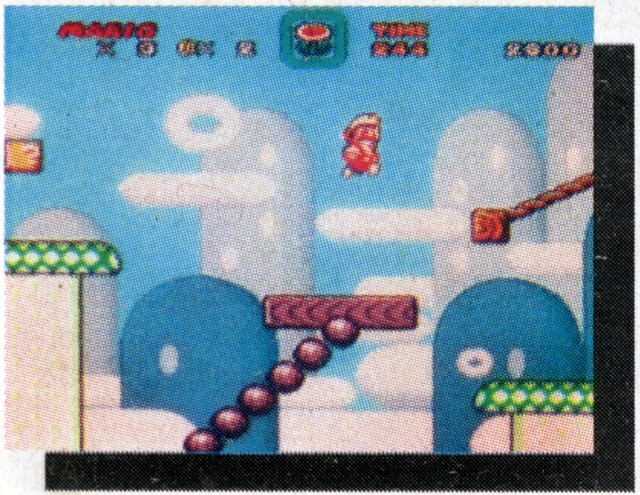 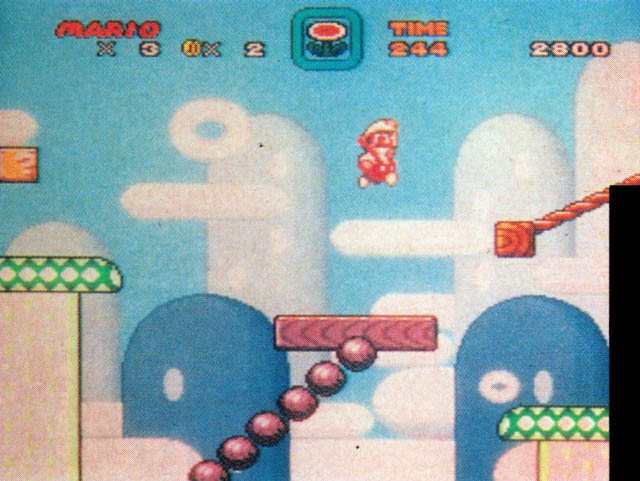 The ? Blocks resemble those used in Super Mario Bros. 3, as do the wood blocks, which were ultimately removed from the final version. 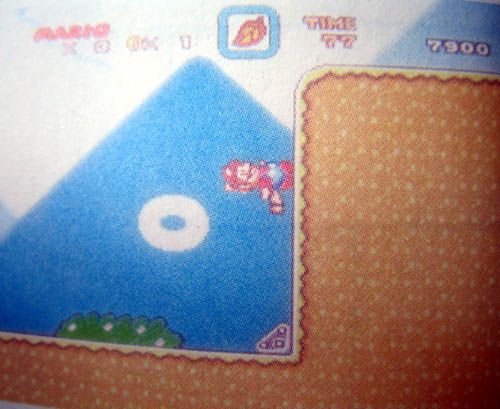 The Super Leaf from Super Mario Bros. 3 is present at this point, as is Raccoon Mario. The final game replaced them with the Cape Feather and Cape Mario. The triangle block looks more mechanical than the final version, which was made magenta and given a face. The top corner of the hill is also more rounded, possibly to accommodate the triangle block. Mario's sprite isn't squashed when running up a wall (the final has a unique sprite for running up a wall, which looks squished when made vertical), indicating the sprite was rotated on-demand. 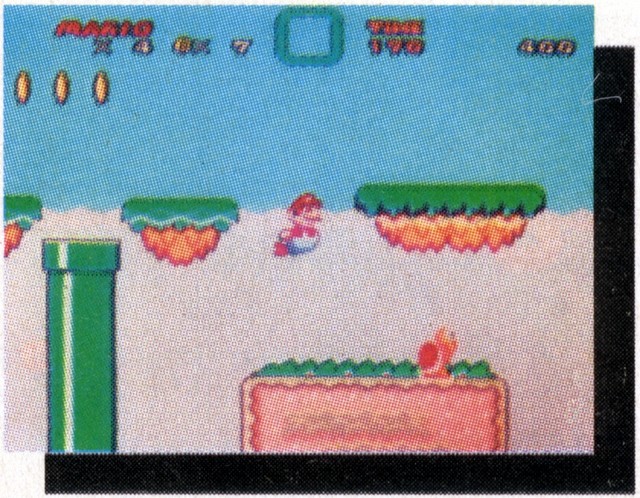 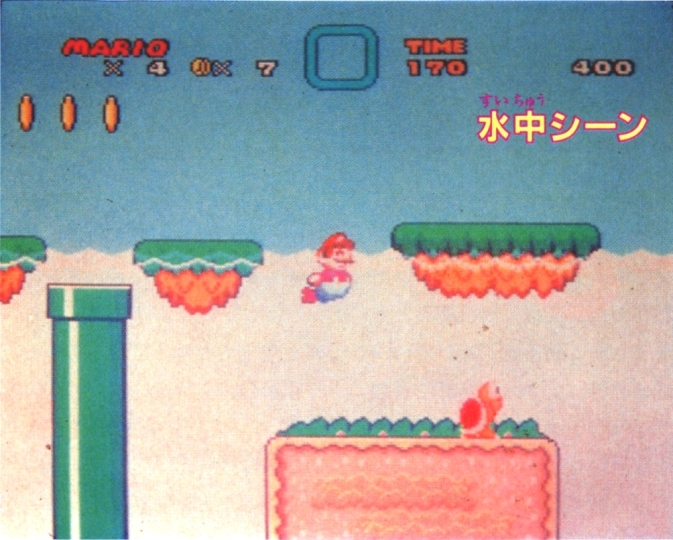 This screenshot appears to be of an early version of the level Mondo.

The Koopa Troopa looks more like the one in Super Mario Bros. 3, although they tend to not appear underwater in the final game. The larger floating platform is unused in the final game but only acts like the smaller floating platforms if Sprite Buoyancy is enabled in the current level, which along with the Koopa suggests that the "rising and falling water" mechanic was already in place at this point.

This level also appears to use a translucent Layer 2 mode, which goes unused in the final version. 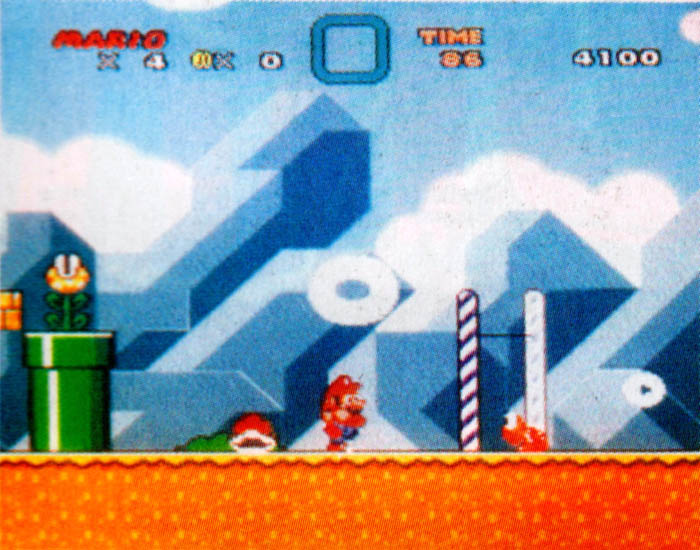 To the left, you can see a Brick Block next to a "classic" upward-facing yellow Piranha Plant (also unused in the final game). The Beach Koopa in this shot is barefoot, matching with the appearance of the classic Koopa Troopas. The tape of the midway point is also much thinner. 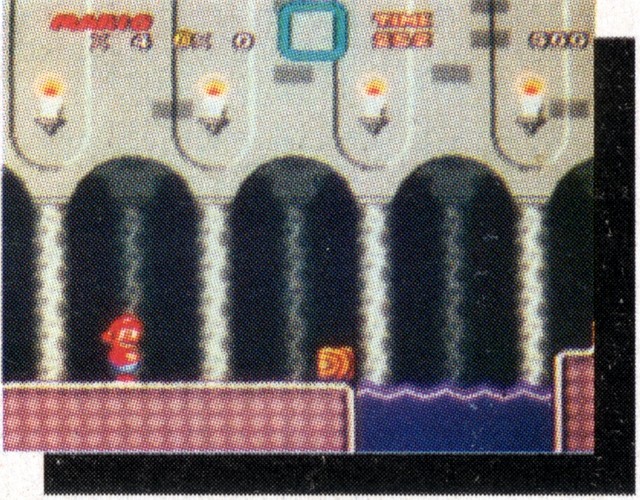 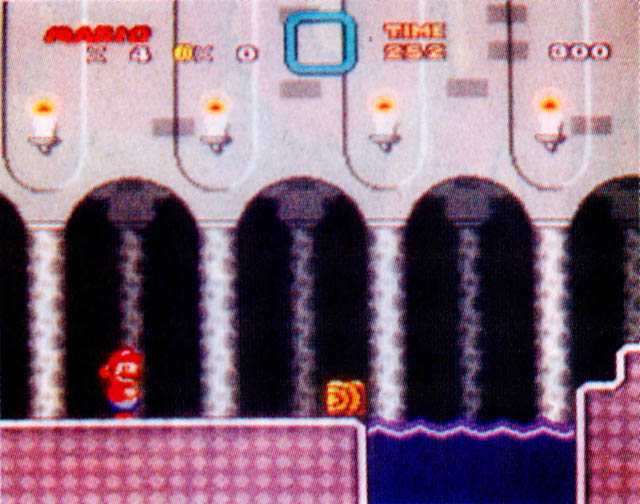 The floor and background are slightly different, along with a somewhat out-of-place wood block.

Mario's appearance in the later build is much closer to the final game, but still has some differences. The brim of the player's cap is black in the final game, while in this build the color of the brim matches the rest of the cap. 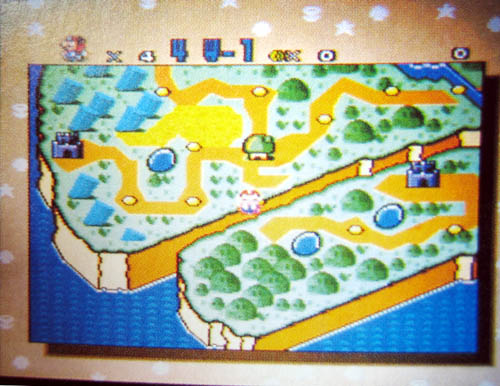 The bottom path is World 4 in this early overworld. It's also more clear from this screenshot that the overworld layout resembles a mushroom. 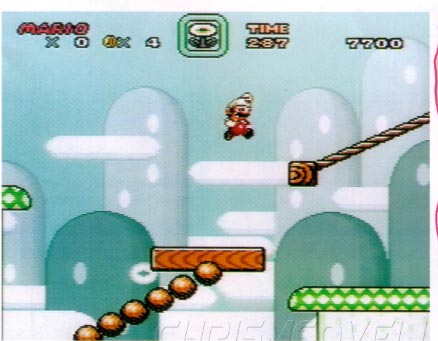 The Fire Flower in the item box has a different color scheme compared to the previous screenshots, which suggests it may have cycled through different palettes like in Super Mario Bros. 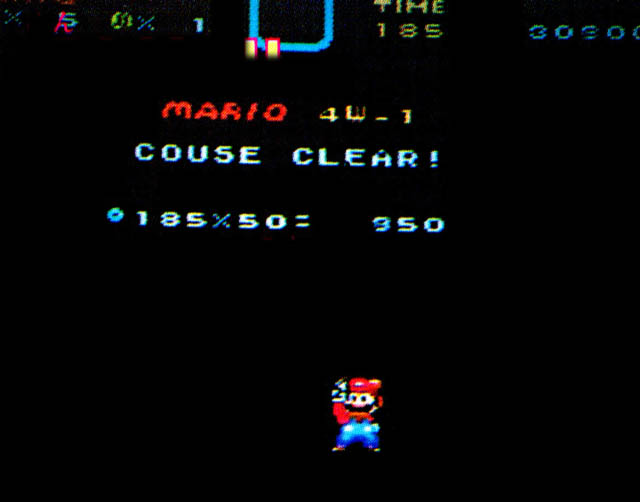 An early version of the score tally after clearing a stage. Next to "MARIO" is the cleared course number ("4W-1" in this case). Notably, "COURSE" is missing its R. 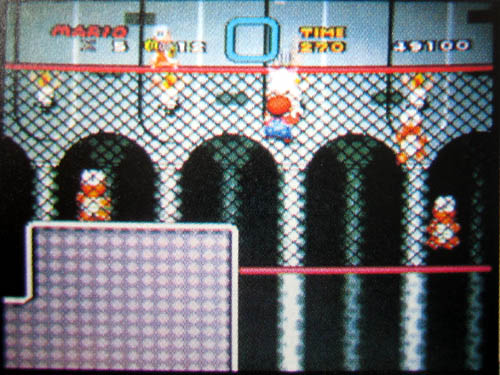 Same floor and background differences. There is also no lava. 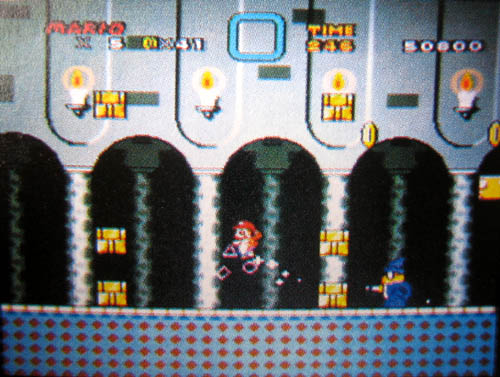 Again, the floor and background are slightly different, and Super Mario Bros. 3-style Brick Blocks are used instead of the final's Turn Blocks. Magikoopa looks like he does in the final, as does his attack. Judging by the angle of his magic, it should've hit the brick block and changed it into a Koopa. This either means that Magikoopa projectiles could go through blocks, or their hitbox was much smaller. Note the dark-blue discoloration of his robe, the result of a palette bug that still exists in the final game. 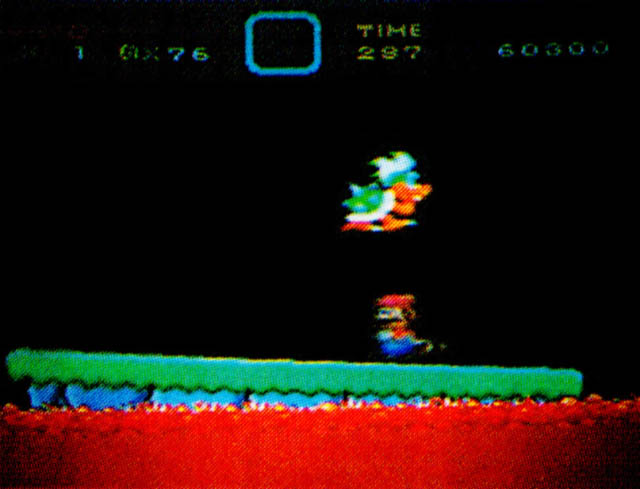 This screenshot shows an early Koopaling "tilting platform over lava" battle, although the platform is never that long, flat, or low in the final. The Koopaling seems to more clearly resemble its Super Mario Bros. 3 style and is most likely Larry Koopa given its palettes and appearance, though Larry never jumps in his boss battle in the final game. 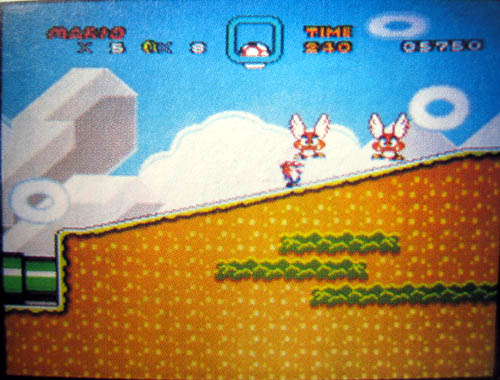 Mario getting hit by a Paragoomba from Super Mario Bros. 3 (replaced with Winged Galoombas in the final game), which also shows that the reserve item box works the same way it does in the final. The pipe also has a slimmer design. 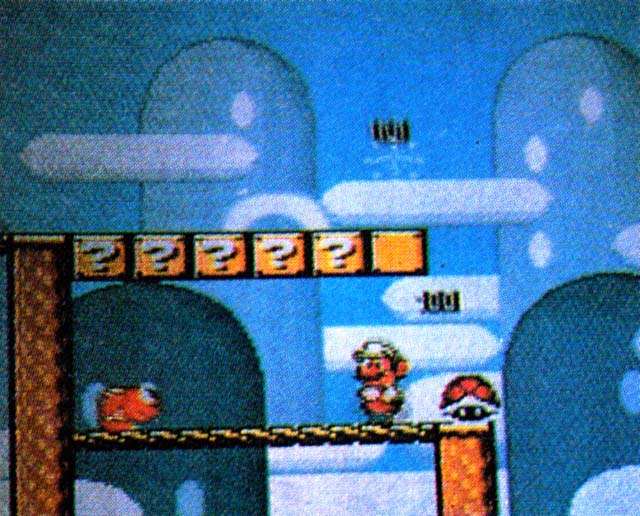 Mario being confronted by a barefoot Beach Koopa. The Super Mario Bros. 3-esque ? Blocks can be seen up close. 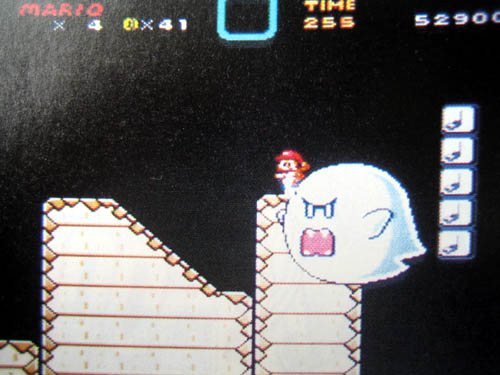 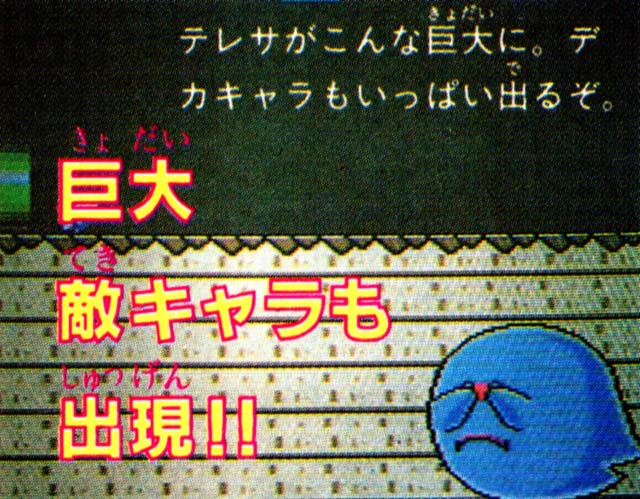 Big Boo looks pretty much like it does in the final, as do the Note Blocks. There's no background at this point and the level design looks amateurish, which may indicate this was merely a test level and not a proper Ghost House.

The ground tiles found a home in the fortress and castle tileset in the final game, though the dirt-like spotted interior was replaced with a diagonal brick pattern and the slopes were removed to make room for other graphics. Leaked internal material indicates that the ground tiles were seemingly supposed to be an early version of the underground tileset. 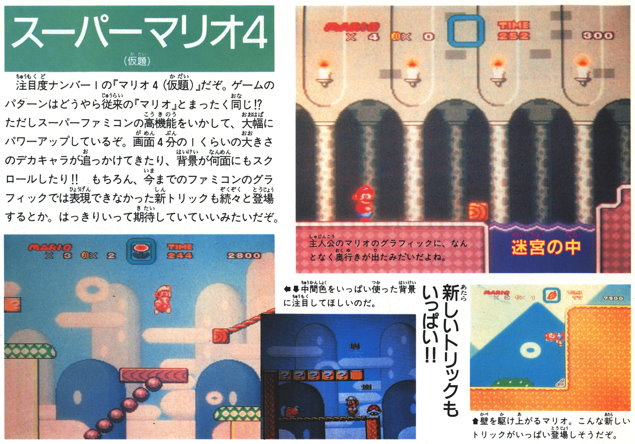 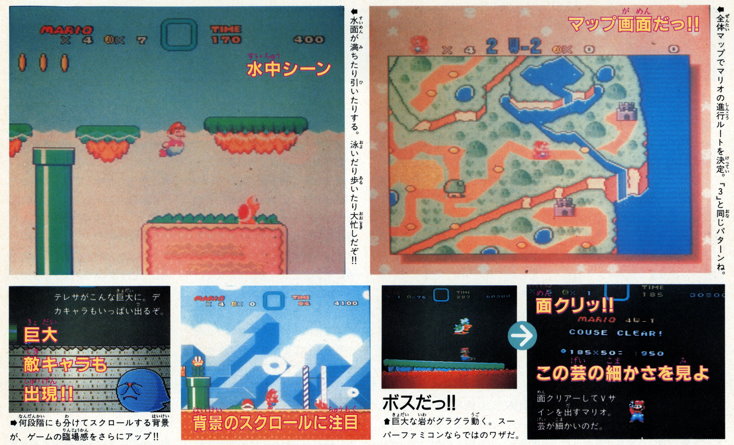 A few new shots along the bottom: 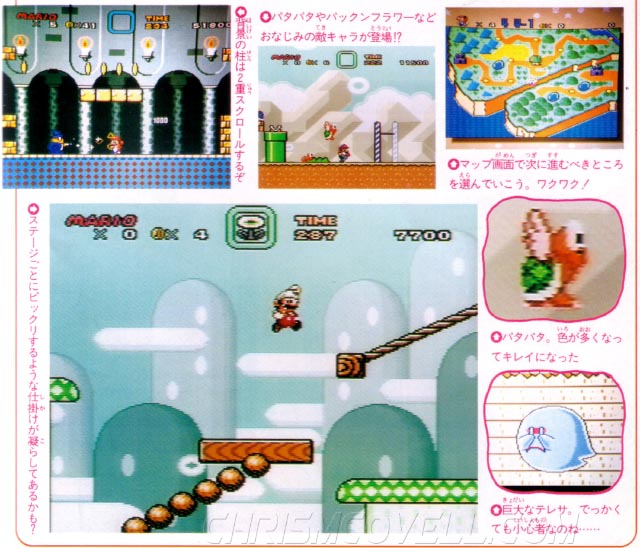 In SFC Mini interview #5: Super Mario World & Yoshi's Island, an early design for Yoshi was revealed along with some other work-in-progress sprites, including Nipper Plants, Chain Chomps, Sledge Bros., and standard Hammer Bros. - all enemies from Super Mario Bros. 3 that didn't make it into the final game. The presence of an upright Koopa Troopa frame suggests that these graphics were created sometime after most of the early screenshots were taken; however, they are clearly not finished, as the Hammer Bro's inconsistent presence of shoes attests to. The early adult Yoshi design bears a rather close resemblance to the final baby Yoshi sprite. The P-Balloon is also red instead of yellow, and the key is vertically flipped.

The original sprite sheet was found among the July 2020 Nintendo leaks, named chr-stock-2.cgx and dated November 29, 1989.

While Chain Chomps, Sledge Bros., and standard Hammer Bros. do appear in the Super Mario World style of the Super Mario Maker games, their graphics are completely different from the ones seen here.

An early version of the final overworld map. 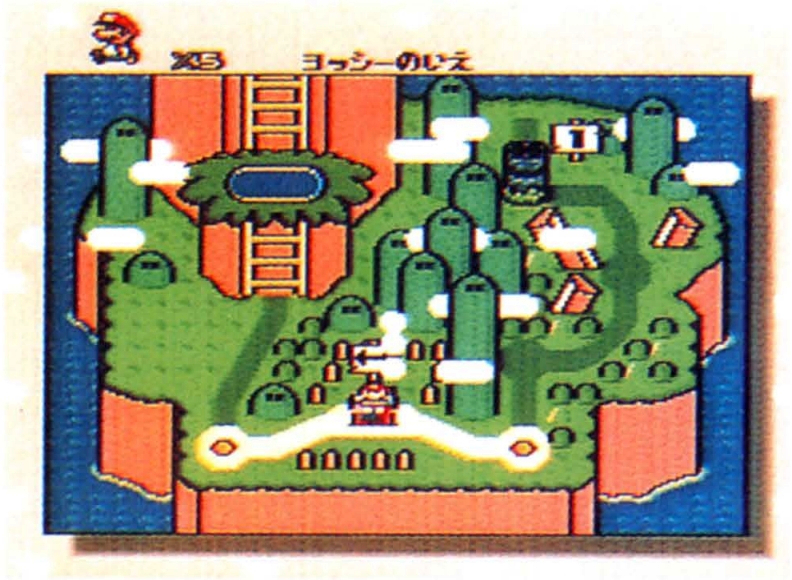 An early version of the Yoshi’s Island overworld map. It doesn’t have any rocks or bushes in the place where the large hill would rise after beating Yoshi’s Island 1, and is just grass instead. 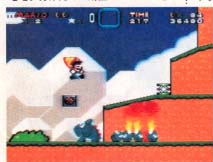 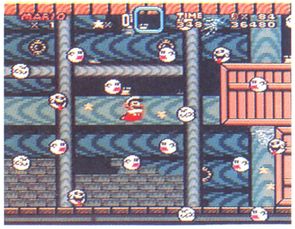 An early version of the Sunken Ghost Ship. Differences include: 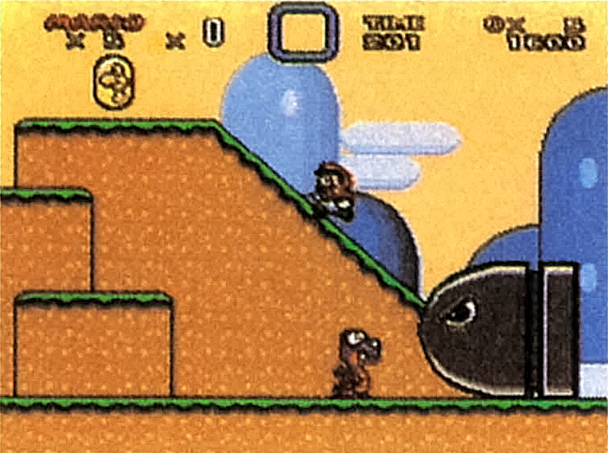 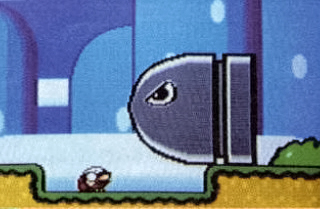 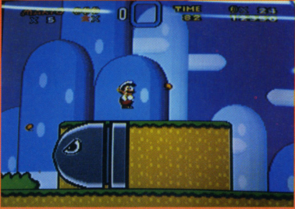 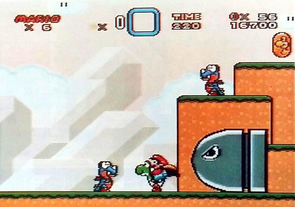 An early, less menacing design for Banzai Bill, featuring a dull grey palette and no mouth, closer in appearance to the Bullet Bills. The near-final HUD, lack of donut clouds, and the yellow sky on the first screenshot indicate that these were taken much later in development than the previous screenshots.

Two US commercials for the game show that, at one point, the US version used the same logo as the Japanese version, albeit with "Super" above "Mario" and "SUPER MARIO BROS. 4" next to it. This logo arrangement and subtitle originally appeared on the Japanese box and label art. Interestingly, the logo for the DiC Super Mario World cartoon (which was produced alongside the US version of the game) also has "Super" above "Mario".

The "SUPER MARIO BROS. 4" sprite can be found in the graphics data of the game's non-Japanese releases only.

The first early title screen not only doesn't show the 4 but also doesn't have the copyright info. Given that the later "SUPER MARIO BROS. 4" shot has both of these, it's possible that neither was ready at that point or a bug prevented them from appearing on the title screen. The early US title screen is also missing grass tiles on top of the ground.

The font used for message boxes and overworld level names differs slightly from the final version. From the level names shown in the commercials, we can tell that the capital letters "Y", "A", "N", "V", "M", and "G" are differently shaped, as is the number "4".

Retrieved from "https://tcrf.net/index.php?title=Prerelease:Super_Mario_World_(SNES)&oldid=1163505"
Categories:
Cleanup > To do
Games > Games by content > Prereleases