This page details prerelease information and/or media for The Rise of Captain Longbeard. 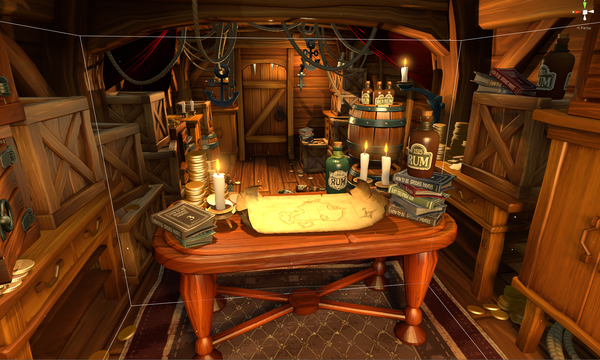 Found on the Official Team's Dev Blog (Source) is a screenshot of an early version of the Captain's Cabin. This screenshot was taken at least two months prior to the final release of the game, as the blog post it's contained in was published on August 19, 2016. This version contains vastly different lighting and has many more props on the table compared to the final release, including gold coins, bottles of rum, books, and an early map. This screenshot was taken from the Unity engine's editor window, as the camera controls and BoxCollider boundaries are visible.

In the final, the Captain's Cabin has been mostly cleared out, and several important objects missing from the early version are now on the table, such as the Medallion, the World Map, the knife used to mark targets on the World Map, and the jewel showing how many Golden Heart Pieces you have obtained. This change was likely made to direct attention towards the important props, as the early scene is rather busy.