The May 3 prototype was built just over a month after the March 28 one. In that time, several drastic changes took place.

This proto shows some interesting work that was done over the month-plus after the March prototype. The Museum Heist and Warehouse levels are pretty much what they are in the final, save for some exceptions, and the Junkyard level has changed appearance, including the implementation of the stacking bricks idea. Hollywood Freeway still is very primitive.

Much of the music has been taken out, and now the title, three implementations of the freeway level and some sort of goal theme are the only pieces of music in the game. The title's music has evolved a bit from the last proto, sounding more fuller like the final, while the freeway song is exactly the same as the previous build. 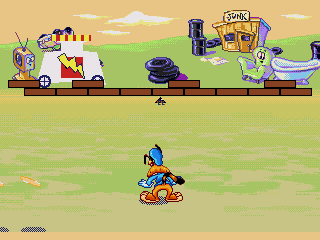 The background has been edited from the previous build, but retains some things from it. The brick throwing idea is now implemented, albeit poorly. The accuracy needed to get anything lined in place makes this hard to play. Now, there's a machine in the back actually throwing stuff at you, drawn in the primitive way that a lot of the stand-in art has been.

A comparison of the bare background layers between this proto and the earlier March 28 build. 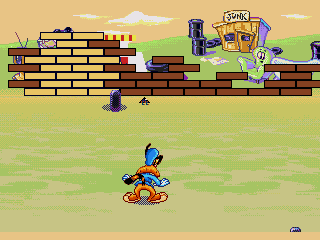 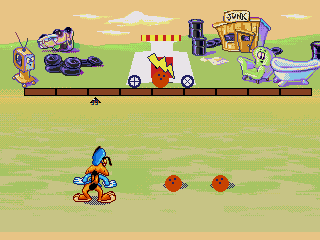 In one act, bowling balls come at you. They appear in the final too, though with actual graphics rather than as red shapes.

In the final, the stages typically have the level's purported villain appear on screen to try to impede your goal. In the final, it's Mickey Rat for this level. They originally first planned for this stage's villain to be The Collector, who appears in the first Lucky Piquel episode of the TV show. 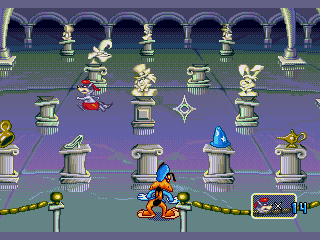 This level already changed to its final form since the month before the last proto. The projectile from the March 28th proto is still here, with a new graphic. You can throw donuts at a much faster rate than the final. Bonkers, however, moves slower, and you need to hold B to run, which isn't very helpful considering that's the button you need to shoot too. A sound sample of bowling pins being knocked over also sounds when you hit enemies, something not kept in the final. 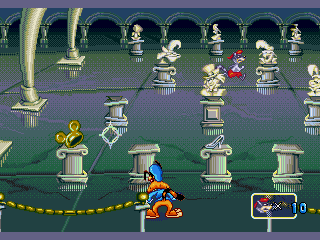 Here's one act with another palette. 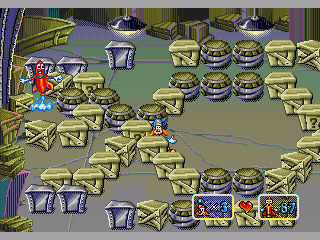 Now reaching its final state, the obvious difference is that the rocket from the previous build still remains here, with new graphics. Other differences include Bonkers yelling "Yes!" whenever he collects a piece and the bowling pin sample sound when you hit an enemy, just like in the Museum Heist. Pressing Start still lets you view what parts of Fall Apart Rabbit you've collected. 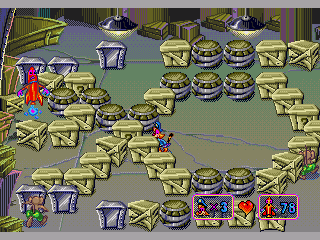 Pressing Start and then going back screws up the palette a little bit for some reason. 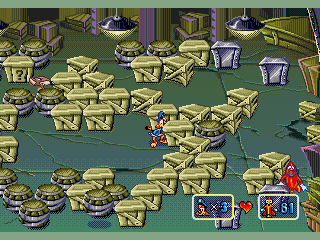 Another act with another palette. 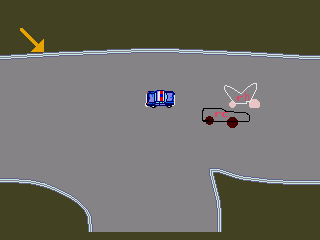 Once again, some very primitive art standing in here. Vehicles run around the course aimlessly and seem to have initials written in for what they are. The arrow at the top left is directing you towards this... 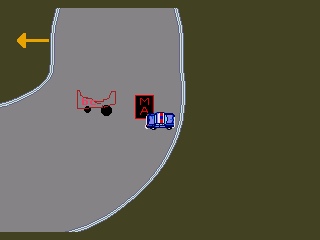 In the final, the point of this level is to defeat a tow truck named Ma, which that box with MA written on it appears to be standing in for. Once you're within distance of it, the arrow at the top left spins like crazy. 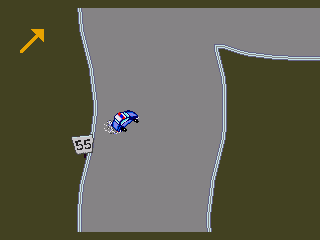 Just one of a few tiny details added within this empty level. Little graphics like this actually did make it to the final. The control in this proto is actually much better than what the final product got. 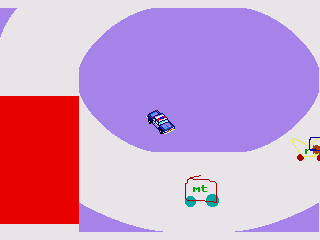 Yet another freeway level. You can't get here unless you're using level select after choosing Exit at the title. The screen doesn't go much further than this; to the right is nothing but emptiness. This level is playing the Freeway music from the March 28 build. 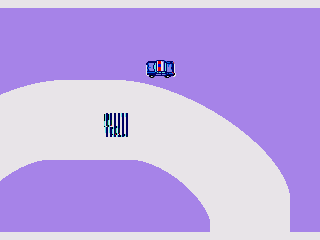 This garbled mess is most likely the MA graphic from the last level. 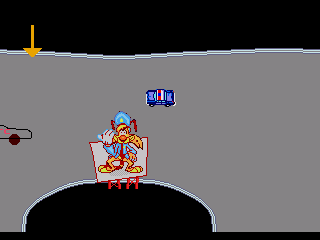 Yet another level only accessible by using the level select after choosing Exit from the title. And it's the freeway again. There's nothing new to see here except the Bonkers billboard, which is his sprite in the Museum and Junkyard levels if you stand still. 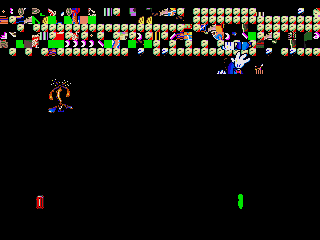 This is the next consecutive level after the Freeway using the level select menu and after going to Exit on the title. The screen stays still for a while and then flashes garbled graphics of Bonkers' sprite. The graphics seem to be from the Junkyard.