This is a sub-page of Proto:Dynamite Headdy (Genesis).

The following differences from the final localized game are already present, even in the earliest prototypes: 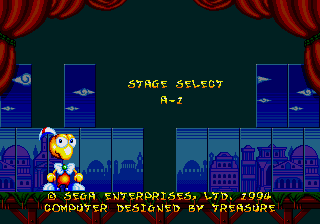 As noted above, the June 16th prototype has a different stage select that's enabled by default. This replaces the Japanese version's stage select, which can only select the first part of each stage.

There are also 8 extra scenes (if they can be called that) that can be selected.

Trademark symbols were added to certain graphics starting with this build.

This inexplicable change to the Super Finagler's lasers first appeared in this version of the game. If this was made to make the beam harder to see: Boo. Boo, I say.

Scene 3-1
The HeadCase in the Flying Soldier arena is gone from this point on in development.

The separate power-up screens from the Japanese game were merged into one starting with this build.

Scene 8-1 / Scene 8-2
The biggest surprise, gameplay-wise anyway, in these prototypes are in these scenes. In addition to carrying the Pin Head and Spike Head, HeadCase carries the Super Head in the June 14th and 16th prototypes.

This is a most unusual addition. The Super Head doesn't appear here in the final English game, the final Japanese game, or even in the April prototype! It seems to have been added specifically for the localized game, then quickly taken out by the June 22nd build.

Even though the boss dialogue has already been cut out, there are still plenty of text changes. Headdy's buddies are a chatty bunch.

All three of Headdy's friends have more dialogue in the Japanese and June 14th/16th prototypes: One chunk prompting to take the training, two for confirming or declining the training, and one for failing to complete the training. Here they are, in all of their clunky, unedited glory.

This stage's title, "VICE VERSA", is misspelled as "VICE VERSE" in the June 14th and 16th builds.

The June 16th build keeps the Japanese text, while the June 22nd build is mostly the same as the final, save for "FIGHT!" lingering around in the instructions.

Almost every single character in the cast roll received a name change: