This page details one or more prototype versions of Gain Ground (Genesis). 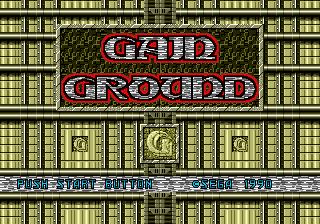 This prototype is dated July 27, 1990; over five months before the game was released.

The date in the ROM header is nearly a full year earlier than the final release is.

The buttons are mapped differently in the prototype.

Some of the default names in the high score screen were changed. These are likely developer names. Their default scores were also significantly increased. 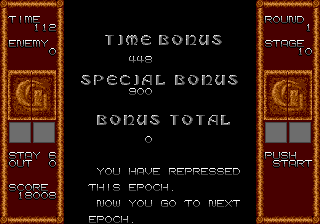 As with the original arcade version, one of these messages will appear at the bottom of the results screen after completing a level:

The text was removed from the final release for some reason.

All of the stages in Rounds 4 and 5 are unfinished. The background graphics are largely complete, though lacking in animation and collision detection. Enemies have not been properly placed; typically just a single glitched enemy appears in the upper-left corner of the field. Killing this enemy completes the level.

The game will crash after finishing Round 5, Stage 6, making the game unbeatable.

As an aside, the arcade machines featured in this stage are Racing Hero (top-left), After Burner (bottom-left), and G-LOC: Air Battle (bottom-right).

The alternate exit on the left side of the field was removed.